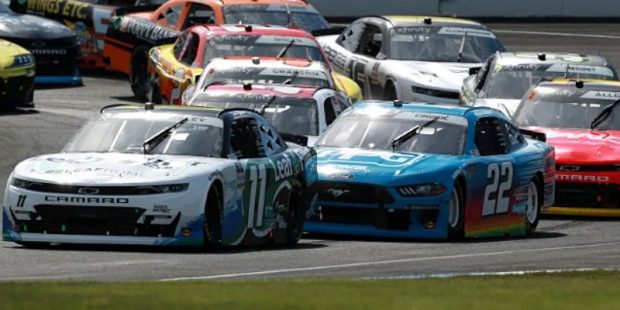 This weekend’s NASCAR action moves to the road course at Indianapolis Motor Speedway. The Xfinity Series event comes on Saturday with the Pennzoil 150 at The Brickyard. Last week, Noah Gragson won the Xfinity Series event at Pocono Raceway, coming in first at the Explore the Pocono Mountains 250. Gragson had to fight off Ty Gibbs and won narrowly, as the two stayed within 0.3 seconds of each other for the last 15 laps. Gibbs was going for his fifth Xfinity Series win of the year and had won three times with a pass on the last lap, but Gragson held him off. Earlier in the race, Gragson’s race strategy paid off, as he took a gas and tire stop with 38 laps to go. He restarted in sixth, behind Gibbs, but Gibbs did not take tires, and Gragson was able to work to the lead with 22 laps remaining. Check out the NASCAR Xfinity odds for this week’s race, set for a 3:30 pm Eastern time start, with the broadcast on NBC, SiriusXM and Peacock.


Chase Briscoe drops down from the Cup Series to run with the Xfinity group this week. He ran twice in Xfinity Series races in 2021, but he has not run on a road course in the Xfinity Series since the 2020 season. He almost won at the Indianapolis road course in the Cup Series last year, but he had a penalty late in the race that kept him from victory. On road courses in the Xfinity Series, he has ten career starts, with two wins among three top-five and seven top-ten finishes. Overall, he has led 140 laps in those races and has an average finish of 9.5. Briscoe is from Indiana and will be running in the #07 car, which Cole Custer has used quite effectively in two road course starts.

Ty Gibbs has to be coming in hungry after coming so close at Pocono last week. He has finished in the top two twice in his last four races. Road courses have been an easy lesson for him, as he won his first Xfinity Series start on this type of track, beating Austin Cindric at the Daytona Road Course. In the last two Xfinity Series road course races, he has dominated; at Road America, he came in first after leading five laps and holding an average running position of 5.0. He finished seventh at Portland but led 42 laps and had an average running position of 6.0. His car at Portland was the best, but he had a crash under caution that pushed him way back in the field. At Road America, he edged by Kyle Larson on the last lap. At The Brickyard last year, he led four laps but only finished 19th.

Noah Gragson started 2022 with four top-three finishes. He had fallen off that torrid pace before winning last week at Pocono. He is farther down the odds list than he would otherwise be because of the Cup Series drivers who are pulling double duty. Gragson has never won on a road course in the Xfinity Series (18 starts), but he has cracked the top five eight times, including twice at The Brickyard. In three road course races so far this year, he has finished in the top ten each time.