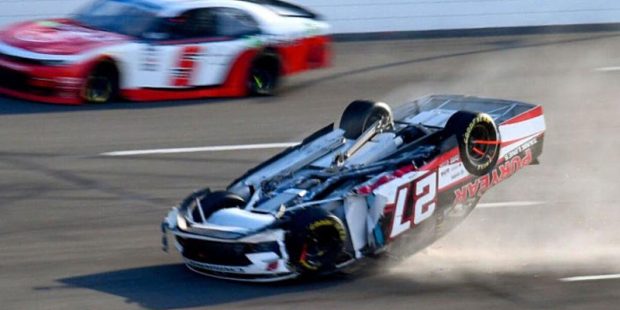 A.J. Allmendinger was the winner in last week’s Pennzoil 150 at The Brickyard, cruising to victory on the Indianapolis Motor Speedway Road Course. Allmendinger led 42 of the 62 laps and survived a nearly disastrous pit stop that lasted 25 seconds, pushing him from 1st to 13th for a Lap 19 restart. He has won three Xfinity Series races this season, all on road courses, and he has won four of the last five Xfinity Series events on road courses. This week, the series moves to Michigan International Speedway for the New Holland 250. You can watch Saturday’s action starting at 3:30 pm Eastern time on the USA Network and listen on the Motor Racing Network and SiriusXM. Let’s look at the NASCAR Xfinity odds for your weekend bets.


Michigan International Speedway is a two-mile speedway with moderate banking (18 degrees). Shaped like a D, the track is one of the fastest in NASCAR because of the wide racing surface, the long straightaways, the wide corners and the lack of a requirement for restrictor plates. Qualifying speeds generally exceed 200 mph, and corner entry speeds have gotten as high as 220 mph since the track was repaved in 2012.

A.J. Allmendinger badmouths his cars every week, saying that the vehicles lack the speed to win a title, but look who’s at the top of the Xfinity Series driver standings.

Ty Gibbs has put together a terrific rookie season, but on the oval tracks, he has not fared as well. This has less to do with his driving skills than it does with the car his team has put him in.

Justin Allgaier has won three races among seven top-five finishes in 11 races since the start of May, and he’s not the favorite this week, so he makes an excellent value pick.

Noah Gragson started 2021 in sizzling fashion before falling off a bit. However, he won at Pocono two weeks ago after looking like he was fading, so he could be primed for another hot streak.

John Hunter Nemechek doesn’t have the best car, but the #26 is something he always leverages as much as possible. If there is a late caution, he could swoop in to victory.

Austin Hill is the most underrated NASCAR driver when it comes to figuring in his REal Rating.

Sheldon Creed has had disappointing results on the track, but he posted a Real Rating of 0.89 at New Hampshire and 0.95 at Pocono. These numbers mean that he will start getting wins sooner than later.

Daniel Hemric struggles on intermediate tracks, and the Kaulig Racing cars don’t do well there either. In a recent tweet, Hemric referred to himself as “garbage,” so he may not have the most confidence coming in.

Sammy Smith is also running in the ARCA race at Michigan, so he will have enough experience to avoid what happened at Pocono, where he ran 49 of 53 inside the top 15 before wrecking out.

Sam Mayer is struggling with the challenges of the Xfinity Series summer schedule. The sport is bouncing back and forth between ovals and road courses, plate tracks, intermediate tracks and flat tracks. Even so, he has three top-ten finishes in the last six starts, with his worst finish 17th.

Kyle Sieg has regularly finished in the top 25 when driving in the secondary RSS cars. He has only run in a few races, but both he and C.J. McLaughlin are likely to surprise with big finishes sooner than later.