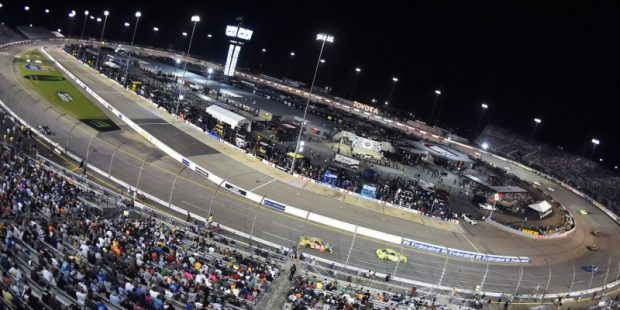 After a week off, the NASCAR Camping World Truck Series will race at Richmond Raceway on Saturday night, with the Worldwide Express 250 for Carrier Appreciation set for 8:00 pm Eastern time. The broadcast will run on FS1, and you can listen to the radio call on the Motor Racing Network or SiriusXM. On July 29, Grant Enfinger won the last race in the series, the TSport 200 at Lucas Oil Indianapolis Raceway Park. Benefiting from fresh tires after the race went to overtime, Enfinger blew by Zane Smith on Lap 206 of 207 and won the first playoff race in the series. Ben Rhodes charged hard but came in second, 0.477 seconds behind Enfinger, who won the seventh race in his career and his first since 2020. This sends him automatically to the second round of the playoffs after a disappointing regular season. One factor that seemed to help him was the return of veteran crew chief Jeff Hensley, who came back on July 9. Hensley opted to bring Enfinger in to pit for tires after a wreck on Lap 191, and that call made all the difference. Who will win this time around? Read on for the NASCAR betting odds for each driver.


Grant Enfinger remains an interesting value pick despite winning last week. He is eighth in the odds but is third in the Camping World Truck Series with standings, with 2,057 points. He has won this race in the past, taking first two years ago. However, there is not a lot of historical perspective for this race, because the Worldwide Express 250 took place in Martinsville before moving to Richmond in 2020. Before 2020, this was a spring event, but the COVID-19 delays pushed it to the fall. In 2021, this race ran in April, but now it is back in the fall and part of the playoff series. Enfinger does only have one win this year, but he has seven other top-ten finishes, so consider putting him on your wager card.

John Hunter Nemechek won this race in 2021. He currently sits in fifth place in the NASCAR Camping World Truck Series standings. He won the pole in Indianapolis and held the lead for 75 laps before dropping off to finish in tenth place. In four of his last five races, Nemechek has cracked the top ten, but his last win came back in May in Darlington.

Zane Smith leads the NASCAR Camping World Truck Series standings, and he came in third in Indianapolis, giving him five top-three finishes in his last six races. He doesn’t come with a lot of value, but when you’ve been running as well as he has, you don’t need any. He leads Ben Rhodes by 14 points in the standings, and Rhodes has been strong at Richmond recently, finishing in the top ten in each of the last two races here, with an average finish of 5.0, better than any of the other playoff contenders except Enfinger.

Ty Majeski is making his playoff debut this season, and he is 31 points back of Zane Smith. Of the ten drivers in the playoff lineup. Of the ten drivers eligible to win the playoffs, he is one of four without a victory this season, along with Carson Hocevar, Matt Crafton and Christian Eckes. Only eight of these ten will advance to the second round of the playoffs, so expect one of these four to make a move at Richmond. Crafton was the runner-up here behind Enfinger in 2020, so he makes an interesting dark horse.