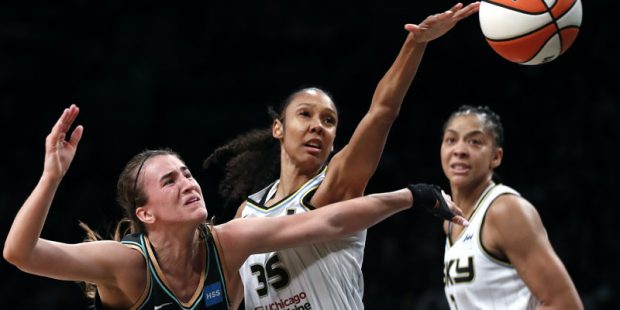 The first round of the WNBA playoffs is in the books. The Seattle Storm swept the Washington Mystics, and the Las Vegas Aces swept the Phoenix Mercury, so the Storm and the Aces will meet in one best-of-five semifinal series. On the other side of the bracket, the Chicago Sky needed three games to eliminate the New York Liberty, while the Dallas Wings also took the Connecticut Sun to a third game before falling, and so the other semifinal series will feature Chicago and Connecticut. Let’s look at the schedule and each series’ WNBA betting predictions.

This series is Las Vegas’ chance to avenge the 2020 WNBA Finals, when Seattle beat them for the championship. The Aces only have one starter from those Finals, A’ja Wilson, and the only rotation player remaining is Jackie Young. The head coach then was Bill Laimbeer, but now it is Becky Hammon. So the change has been significant.

Seattle, on the other hand, is largely the same. Breanna Stewart, Sue Bird and Jewell Loyd are still starting. Epiphanny Prince is still the leader of the second team, and Ezi Magbegor is still around, but now she’s a big presence in the middle. Noelle Quinn was the associate head coach in 2020 and leads the team now.

Las Vegas won three of the four regular-season matchups, and their strength is offensive efficiency. They scored 109.6 points per 100 possessions, tops in the league – and seven full points better than the Storm, who posted the second-highest rating. The offense runs through Wilson, who had 22.8 points and 11.8 boards per game against Seattle. She rolls well off screens and can bring space to the floor. She can also draw contact and get the team into the bonus long before the end of the period. Wilson has three quality perimeter scorers to dish the ball to.

Seattle can put Breanna Stewart on Wilson if they want a shutdown defender, but Stewart is also a key offensive contributor, so the Storm may do some switching to keep from wearing Stewart out. Loyd is one of the WNBA’s best when it comes to making tough shots. The defense is solid overall, but discipline will be a must to slow down the Aces.

These two teams met in the semifinals a year ago, and the Sky, despite holding just a six-seed, knocked off the one-seed Sun in four games. This time around, things are different, with Chicag holding the role of favorite. For Connecticut, expect Jonquel Jones to emerge once again. Her scoring dropped this season from 19.4 points per game to just 14.6. However, in the first round against Dallas, she put up 16.7 points per game. She had 24 in a matchup in June against the Sky.

During the regular season, the Sky beat Connecticut four times. However, the Sun went 8-2 after the All-Star break as part of a 25-11 season.