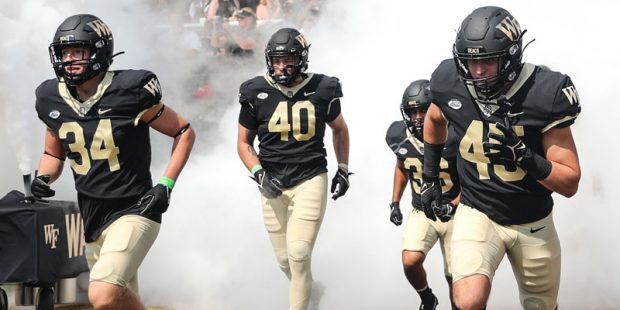 Wake Forest won 11 games in 2021 and made it to the ACC Championship, where the Demon Deacons lost to Pitt. Quarterback Sam Hartman is one of the top signal-callers in the nation, and the wide receiving corps is one of the best in the ACC, but without a signature name, Wake Forest is flying way under the radar. Let’s take a look at Wake Forest’s 2022 football schedule, with College Football betting picks for each contest.

The Demon Deacons open their season on a Thursday, and they still can’t get on national television. They do open with an FCS cupcake, which gives them room to operate if there are hiccups in the first quarter. 1-0.

Sam Hartman was third in the nation last year in points responsible for and had 4,228 passing yards, sixth best in the history of the ACC. Vanderbilt has a generous passing defense, and Hartman can also run the ball well, so expect a breakout offensive day for the visitors. 2-0.

Liberty still has Hugh Freeze as the head coach, which means that they are dangerous for any opponent that would overlook them. Their offense can score in bunches, and Wake Forest did permit at least 42 points in five different games last year. However, the Demon Deacon offense should be able to set the pace and pull away. 3-0.

You might as well open ACC play with your toughest test, right? Clemson brings the best defense in the ACC, so it will be up to the Wake Forest defense to get after D.J. Uigalelei and force turnovers – and the Wake defense forced 29 takeaways last year. 3-1.

How will the Demon Deacons bounce back after losing to Clemson? The Seminoles finished their 2021 season by winning five of seven, with three victories over eventual bowl qualifiers, and they were winning at Clemson in the fourth quarter. Will that be enough? 4-1.

This matchup has “trap game” all over it, as the Black Knights as one of the strongest under-the-radar programs in the country. Army runs the triple-option offense, which slows games down and frustrates offenses, and their defense is physical. 4-2.

Getting above .500 would be an improvement for BC, but this game won’t be a win, as Wake Forest will have had two weeks to figure out how to bounce back from dropping two out of three. 5-2.

The Louisville offense can be explosive, but neither side of the ball has caught up with Wake Forest. 6-2.

This will be a tough road test, as Wake Forest has to travel across the Research Triangle to take on another ACC contender. Even so, I like Wake to keep the streak going. 7-2.

Mack Brown’s program is the fourth best in North Carolina, so unless the Tar Heels have a major upset brewing, the Demon Deacons should keep rolling. 8-2.

This is another team looking to get back to respectability in the ACC, but they have a hard time making bowl games, let alone taking down division leaders. 9-2.

The Demon Deacons finish the regular season with a six-game winning streak. Will it be enough to get Wake Forest into the ACC title game? 10-2.