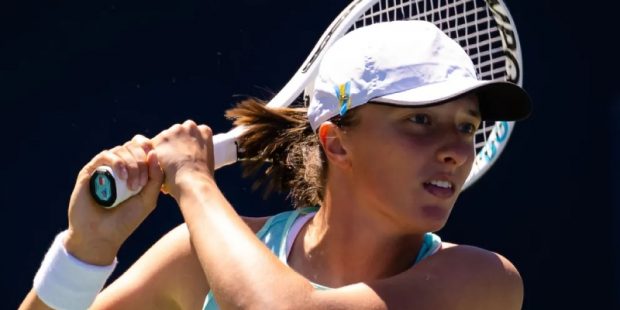 Iga Swiatek has recently dominated women’s professional tennis, at least at the major level, but this is a sport that has shown a lot more different winners than the men’s sport has. One woman getting a lot of press ahead of the singles draw is Serena Williams, who has hinted that she might retire after Flushing Meadows. As a result, she’s getting some buzz as a dark horse in the sports betting mix for the women’s singles draw at the U.S. Open. However, she went down to Emma Raducanu in the first round of the Cincinnati Open, a warmup event ahead of the major. One wonders if she can make it through the grueling draw; at the same time, Raducanu is on the rise after beating two former World #1 players this week; she also took down Victoria Azarenka. Read on to get the latest US Open Odds from the women’s singles draw, at least in the top selections.


One question worth asking ahead of this tournament has to do with the equipment. Iga Swiatek has asked why women and men do not use the same balls at the major, particularly since the U.S. Open is the only Grand Slam event to make this differentiation. A couple of decades ago, the sport’s concern about elbow injuries for women was a valid concern, but the increased strength work that women do before taking part in professional tennis in this generation makes the differentiation unnecessary. The fact that players outside the United States, particularly in Europe, cannot get the balls to prepare may give American players an advantage.

Serena Wiliams will not be the only family member in the draw, as her sister, Venus, has received a wild-card entry from USTA. This will be her 23rd appearance at this Grand Slam. She was out of competition for almost a year before playing at Wimbledon in mixed doubles this summer. She entered the Citi Open, the Canadian Open and the Western and Southern Open, but she lost in the first round each time. Dominic Thiem and Sofia Kenin have also received wild cards, despite falling out of the top 100 with injuries.

Rafael Nadal took a shocking upset loss at the hands of Borna Coric, ranked 152nd in the ATP rankings, 7-6 (9), 4-6, 6-3 at the Western and Southern Open. Nadal holds 22 Grand Slam titles, but he had not played since July, when an abdominal muscle tear caused him to retire from the Wimbledon semifinals. Coric had most recently lost to Marin Cilic in the opening round of the ATP Masters 1000 Canada. Before that, he had made it to the quarterfinals of the Hamburg European Open where he fell to Alex Molcan. Nadal seems to have recovered from the abdominal injury, as he served as fast as 121 mph. However, his service return needs work ahead of the U.S. Open.

Nick Kyrgios has become part of the contender talk for the U.S. Open after getting to the finals at Wimbledon, winning his seventh title in men’s singles in Washington and then getting to the quarterfinals in Montreal. However, at the Cincinnati Open, he looked lackluster in a 6-3, 6-2 loss against Taylor Fritz in the second round. He had difficulties with his knee, and the hope is that he does not have an injury that will keep him from making another deep run.