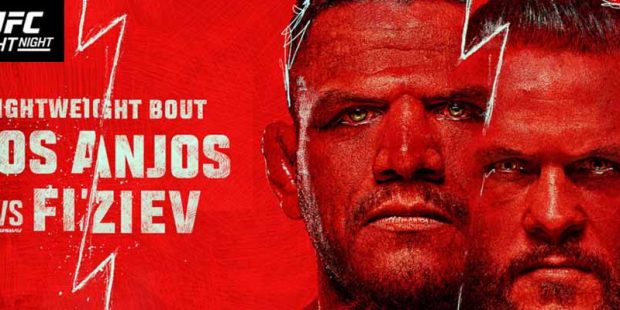 Former UFC Lightweight Champion Rafael dos Anjos tangles with Rafael Fiziev in a lightweight bout that will headline UFC on ESPN 39, set for Saturday at the UFC Apex facility in Las Vegas. Visa issues for Fiziev, as well as a positive COVID-19 test, have forced this bout to be postponed twice, but fans will get to see these two tangle at last on Saturday. Caio Borralho meets Armen Petrosyan in the co-headliner for a middleweight bout.

For UFC betting fans, we have previews of the top two bouts after the complete fight card.


Rafael Fiziev (11-1, 5-1 UFC, -200) vs Rafael dos Anjos (31-13, 20-11 UFC, +170) features one of the promotion’s legends with an up-and-coming lightweight. Dos Anjos joined in 2008 and ground along until 2013, when he dismantled Donald “Cowboy” Cerrone to emerge as a title contender. He took down Anthony Pettis at the end of 2014 to grab the belt in a 25-minute war. He defended his title near the end of 2015 after missing some time with injuries, needing just over a minute to finish Cerrone. A broken foot sidelined dos Anjos again, and then he lost his belt to Eddie Alvarez, who knocked dos Anjos in about four minutes. Dos Anjos moved to welterweight and had some success until he hit the talented wrestlers and dropped back down to lightweight. He demolished Paul Felder before missing all of 2021, and then he finished Renato Carneiro in March. Can he keep climbing the ladder?

Fiziev also struggled early in his UFC career. In his debut, he got knocked out in just 86 seconds by Magomed Mustafaev. In 2020, he broke out with a win over Marc Diakiese, using wrestling defense and his striking power. Fiziev then knocked out Carneiro in just over four minutes. He edged Bobby Green on the cards and then used a spinning wheel kick to knock out Brad Riddell in highlight-reel fashion in the third round. Against dos Anjos, what usually works is to bring pressure and force him backward, which also requires outwrestling dos Anjos. Fiziev’s cardio can be a little suspect in the late rounds, so I expect dos Anjos to turn this into a grinding fight, stacking up enough points to take the win.

Caio Borralho (11-1, 1-0 UFC, -215) vs Armen Petrosyan (7-1, 1-0 UFC, +185) matches two middleweights who are new to the promotion and look solid so far. Borralho earned his contract off the 2021 season of Dana White’s Contender Series, running over Gadzhi Omargadzhiev in his debut. Petrosyan also came in from Dana White’s Contender Series, showing a bit more violence in his approach than Borralho. In his UFC debut, Petrosyan used volume and pace to beat Gregory Rodrigues on the cards for the first decision win of his career. Even though he could not finish Rodrigues early, Petrosyan has shown impressive stamina and power with his striking in the later rounds, even when he was just a regional fighter. Petrosyan has more striking power, while Borralho would likely prefer to get this fight on the ground, at least enough to slow the pace of the right down. Borralho is the more diversified fighter, but Petrosyan comes with more power, better cardio – and a better betting value.