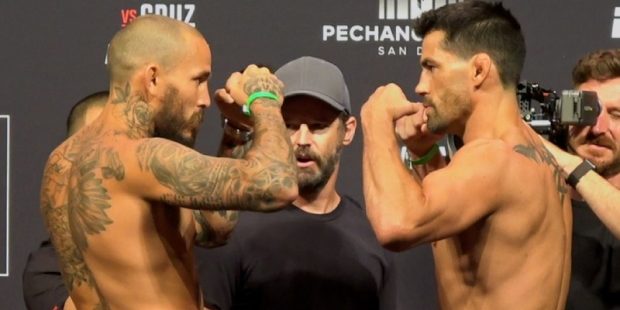 Sunny California is the backdrop for UFC on ESPN 41, as Pechanga Arena in San Diego will host this week’s installment of the premier MMA promotion. Dominick Cruz and Marlon Vera will square off in a bantamweight fight for the main event. Nate Landwehr and David Onama will meet in the co-headliner for a flyweight contretemps. Let’s take a look at the whole fight card, and then we will give our UFC betting prognostication for the two main matchups.

Marlon Vera (19-7-1, 13-6 UFC, -210) vs Dominick Cruz (24-3, 7-2 UFC, +180) is Cruz’s latest stop in a long, winding journey back to title contention. It’s been more than ten years since he blew out an ACL training to defend his title against Urijah Faber, and he’s been trying to come back ever since. He missed almost three years after that injury thanks to a torn groin and several ACL surgeries. He returned in 2014 against Takeya Mizugaki, only needing a minute to get the knockout with all of his built-up wrath. He instantly got a challenger slot against T.J. Dillashaw but tore his ACL again. After rehabbing, he faced Dillashaw and took the belt back. He lost his title to Cody Garbrandt, who prevailed thanks to timing and hand speed, and then he missed another three years and change with upper body injuries. He came back in 2020 against Henry Cejudo but suffered a stoppage in the second round, but 2021 has shown him climbing back up the ranks with wins over Casey Kenney and Pedro Munhoz.

Vera enters his ninth year as part of UFC, and he has evolved from a grappler to add a solid striking game. Both of those elements are constructed around spectacular offensive moments, as he likes to bring pressure until something happens. In fights against the bottom half of the division, that has usually led to an easy finish. As his competition has improved, he has had some closer calls; in November, he was way behind on the cards against Frankie Edgar until he delivered a highlight-reel front kick to deliver a knock out. When he beat Rob Font in April, he had to surrender a lot of control to get in some brutal strikes, and it was those strikes that narrowly brought him the decision win. Cruz should take advantage of Vera’s weaknesses against the takedown, but Vera’s length will make this a real puzzle to solve. Cruz should be able to move to the ground when he needs to in order to pile up enough points to win, although his durability, as always, is a question.

David Onama (10-1, 2-1 UFC, -210) vs Nate Landwehr (15-4, 2-2 UFC, +180) gives us the first UFC fighter born in Uganda in ONama. He made his debut on late notice in 2021, fighting up a weight class but never giving up in a three-round battle against Mason Jones. In 2022, he got to move back to his own weight class, and he has impressed with finishes against Gabriel Benitez and Garrett Armfield. Each of these fights has shown some flaws in Onama’s approach, as his defense is a work under construction, but he can finish, and he has elite stamina, so he has been able to work through adversity to deliver punishment before winning. It’s been just over a month since Onama beat Armfield, and now he gets a tougher test against “The Train.” Landwehr built his reputation by making some terrific comebacks, as the wrestling game tended to go against him, but he managed to survive before delivering some offense late in the fight. In his two UFC wins, he has taken over the fights after a lengthy period of attrition, but when he has lost, he has been lit up early before he can start building his comeback. I don’t see him making it to the comeback phase against Onama.