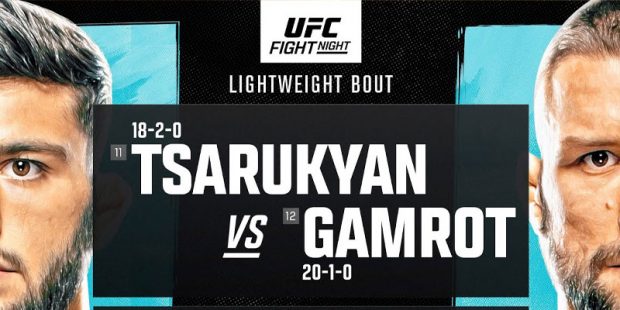 UFC heads back to the Strip this weekend, as the UFC Apex facility in Greater Las Vegas will host UFC on ESPN 38 on Saturday night. The main event pits Arman Tsarukyan against Mateusz Gamrot, former KSW Lightweight and Featherweight Champion, in a lightweight fight. The co-main event features Neil Magny and Shavkat Rakhmonov in a welterweight fight. Read on to find the whole fight card and an online UFC betting update for the top two fights.

Arman Tsarukyan (18-2, -295) vs Mateusz Gamrot (20-1, 1 NC, +245) is an intriguing matchup between two lightweights on the rise. Tsarukyan was already an elite prospect in the sport when he came to UFC in 2019, and his debut was a real test, facing Islam Makhachev in the co-headliner of a card in Russia. Makhachev prevailed clearly on the cards, but Tsarukyan showed signs of great things to come. He currently has a five-fight winning streak, and the only concern is that he will leave defense behind and push forward to bring pressure and take things to the ground. When it works, it works – he knocked out Christos Giagos in the first round and used an elbow from the top position to neutralize Joel Alvarez, eventually earning a stoppage.

Gamrot came to UFC having held two belts in KSW, so when he lost his debut via split decision against Guram Kutateladze, it was a surprise. Gamrot didn’t fight that poorly, but things did not go his way. In 2021, he won three fights, all via finish, including a takedown of Jeremy Stephens with a Kimura in only 65 seconds. Gamrot’s weakness is that he fails to push the action, but he overcame that with Stephens. In wins over Diego Ferreira and Scott Holtzman, both bouts went evenly until Gamrot exploited a moment that pushed things to a finish. Tsarukyan likes to move forward, and Gamrot might have what it takes to take advantage of lapses in defense. Tsarukyan is the better wrestler, but Gamrot grapples better. Both fighters have shown cardio issues at times. This is a fight that looks even in a number of ways, so I’m going with the value.

Neil Magny (26-8, +320) vs Shavkat Rakhmonov (15-0, -390) is the latest adventure in Neil Magny’s lengthy UFC tenure. His biggest run came from 2014 to 2016, as he was able to stack up a lot of wins quickly. He has a long frame and is willing to bring all kinds of volume in the striking game. This often pushes his opponents to go after the clinch, but Magny excels there as well. However, top fighters have been able to take him down; strikes such as Lorenz Larkin have brought pressure and won easily, and Michael Chiesa took control of their fight with his wrestling. This leaves Magny as a bit of a gatekeeper, with those who can beat him entering the contender conversation.

The next fighter to face this test is Rakhmonov. He started his way through UFC by bullying his opposition, but he has also done well when paired against higher quality opposition. In the cinch, Rakhmonov can be overpowered, but he can grapple well and he can also deliver knockout power. In his debut, he used a guillotine choke to finish Alex Oliveira. Rakhomonov might be able to run right over Magny through counter striking or in the clinch, but Magny has what it takes to control him in the clinch. I’m going with the value with this fight as well.