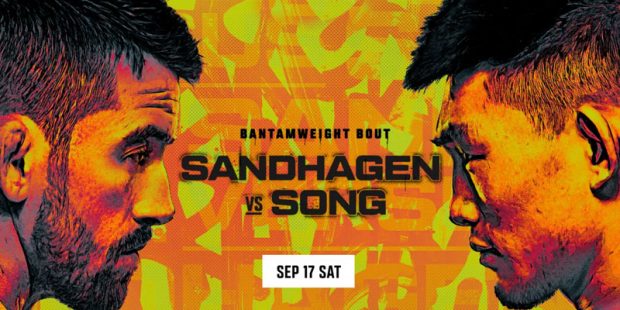 UFC returns to the APEX facility for this weekend’s MMA events, set for Sunday night. Song Yadong will meet former interim UFC Bantamweight Championship challenger Cory Sandhagen. Chidi Njokuani will face Gregory Rodrigues in a middleweight bout in the co-main event. You can find all of the night’s fights on ESPN+. Thinking about including UFC in your online betting this weekend? Check out our predictions before you lock in your wagers.

Cory Sandhagen (14-4, 7-3 UFC, -195) vs Song Yadong (19-6-1, 8-1-1 UFC, +165) is Song’s bid at entering the conversation as a championship contender in the highly talented bantamweight division. He entered UFC with impressive knockouts of Bharat Kandare and Felipe Arantes and then put together a consistent fight against Vince Morales. He made his United States UFC debut in 2019, needing just over two minutes to deliver a brutal knockout of Alejandro Perez. Things got a bit tougher after that, as Cody Stamann wrestled him to a draw, and then he lost to Kyler Phillips, who was supposed to be more of a tomato can for Song. Since then, though, Song has improved, with a decision win over Casey Kenney and a knockout of Julio Arce, and with his win over Marlon Moraes in March, things went so badly that Moraes ended up retiring. He’s just 24, so he still has plenty of time to keep rising in the ranks.

Sandhagen is a talented bantamweight as well, but he has had some losses that keep him from jumping into title conversations. An early win in 2018 over Iuri Alcantara involved an escape from an armbar that would have finished many other fighters, and he kept improving, beating John Lineker and Raphael assuncao. Aljamain Sterling shocked observers by taking Sandhagen down and submitting him in a minute and a half, but Sandhagen bounced back with a wheel-kick knockout of Moraes and a flying knee of Frankie Edgar that ended their fight in just 28 seconds. That was his last win – in February 2021. He lost to T.J. Dillashaw in a controversial split decision, and then he lost to Petr Yan in an interim title fight before taking almost a year off. He needs to beat Song to start moving back up toward title contention. Song needs to show more aggression because Sandhagen brings volume that may stack up more points than the more occasional (but more powerful) strikes from Song. This is a pretty even fight, so I’m going with the value.

Chidi Njokuani (22-7, 2-0 UFC, -125) vs Gregory Rodrigues (12-4, 3-1 UFC, +105) features two exciting middleweights. Njokuani came through Dana White’s Contender Series, knocking out Mario Sousa in 2021 to earn a contract. He has talent on the ground as well as on his feet, but before he came to UFC, he had a reputation for slower fights. We didn’t see that in his first two fights in the promotion, though, as he knocked out both Marc-Andre Barriault and Dusko Todorovic in the first round. Rodrigues is a jump in quality, but while he brings powerful offense, his defense can be absolutely porous. He got knocked out by Jordan Williams on the Contender Series, and he ate a lot of damage against Jun Yong Park in October, and he lost on the cards to Armen Petrosyan in February. He did come back and dominated Julian Marquez, using his wrestling to take control before delivering a knockout. Njokuani should be able to take advantage of the fact that Rodrigues cannot bring offense and protect himself at the same time.