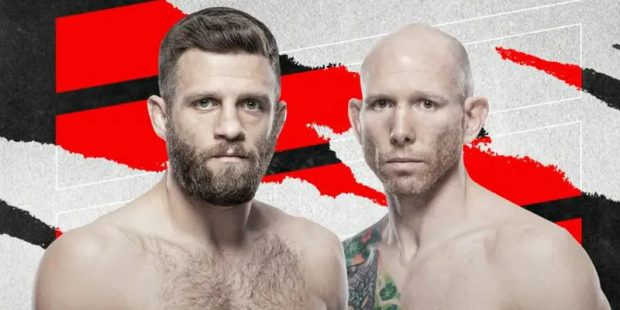 The Lone Star State is the backdrop for UFC on ESPN 37, as the Moody Center in Austin, Texas, will host this weekend’s installment of the premier MMA promotion. The main event is a featherweight bout between Calvin Kattar and Josh Emmett, while the co-headliner brings us Donald “Cowboy” Cerrone, once again, this time in a lightweight tangle with fellow MMA legend Joe Lauzon. Read on to get the complete fight card as well as our UFC betting predictions for the two main fights.

Calvin Kattar (23-5, 7-3 UFC, -235) vs Josh Emmett (17-2, 8-2 UFC, +190) should contribute to the discussion of the best UFC featherweights not named Alexander Volkanovski or Max Holloway. Kattar has been in MMA since 2007, and he has worked his way up the ladder with a focus on boxing and power, which paid off in early wins over Andre Fili and Shane Burgos. Losses to Renato Carneiro and Zabit Magomedsharipov taught him that if he was going to focus on boxing, he needed to have the strength to finish opponents instead of waiting for the cards. He knocked out Jeremy Stephens and won a five-round bout against Dan Ige with ease on the cards. This got Kattar a shot at Holloway, but Holloway was ahead of Kattar the whole fight and delivered all sorts of damage over 25 minutes. It took Kattar a year to come back, but he learned his lesson and dominated the pace against Giga Chikadze, and a win over Emmett would put him back on contender conversations.

Emmett also had some big wins and some hard lessons while climbing the UFC featherweight ladder. He started in the promotion as a lightweight but dropped down in 2017. He beat Felipe Arantes on the cards, delivering a great deal of punishment, and then he knocked out top contender Ricardo Lamas less than eight weeks later, needing only a bit over four minutes to complete the fight. That earned him a shot at Jeremy Stephens in a main event, but things went badly for Emmett, as the fight concluded with a brutal set of shots that left Emmett with several facial fractures. Emmett was out of the Octagon for over a year, but he came back with two straight knockout victories and a three-round win on the cards over Burgos to return to contender status. In that fight, he tore an ACL near the beginning of the fight and had to go three grueling rounds on one leg, and then he was out for over a year once again. In December, he returned and beat Ige on the cards.

Kattar has more of an ability to adjust during a fight than Emmett, and if he can use his jab, he should be able to wear down Emmett, who would rather wait and counter than bring constant pressure. Emmett would win a violent fight if he comes in aggressively and does not back off from Kattar. However, Kattar is the likelier to emerge from a war of attrition.

Donald Cerrone (36-16, 23-13 UFC, -165) vs Joe Lauzon (28-15, 15-12 UFC, +145) marks Lauzon’s first fight with UFC since 2019. He had debuted all the way back in 2006, beating Jens Pulver in an exciting upset. He became known for quick starts, submission wins – and then collapses late as he ran out of gas. As his career wore on, his cardio endurance became even worse, but he still delivered game effort until 2017, when he just looked done in a loss to Steven Ray. After that, Clay Guida knocked him out 1:07 into the first round, and Lauzon got so tired against Chris Gruetzemacher that he had to retire between the second and third rounds. Lauzon did deliver a stoppage against Jonathan Pearce in 1:33 in his last fight, and it’s hard to see him topping that shocking achievement against “Cowboy.”

Cerrone is mostly known for his willingness to fight at just about any time and place. He tends to start slowly, and his endurance is not elite, which has cost him in chances to contend. However, his muay Thai and grappling game have won him more fights than he should have, but recent years have not been kind, as he has not won in six fights, including a loss to Alex Morono that showed that his time might be up. However, Lauzon has been out of the Octagon so long – and he has tired so quickly in his recent fights – that it’s hard to trust him.