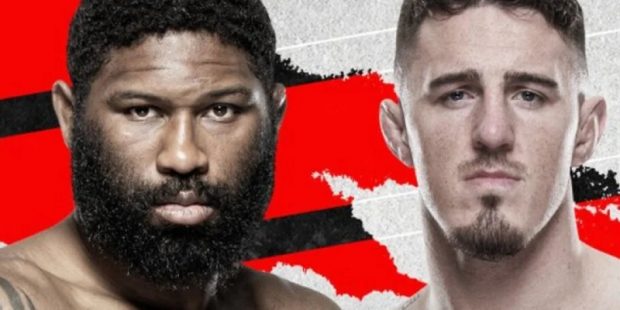 UFC’s Fight Night this weekend comes from England, as the O2 Arena in London will host UFC Fight Night 208 on Saturday night. Curtis Blaydes and Tom Aspinall are set to square off in a heavyweight headliner. In the co-main event, Jack Hermansson and Chris Curtis meet in a middleweight bout. The whole night’s action will be available on ESPN+. Check out the card, and don’t miss our UFC betting predictions for the two main bouts.

Curtis Blaydes (16-3, 1 NC, 11-3 1 NC UFC, +110) vs Tom Aspinall (12-2, 5-0 UFC, -130) is an interesting fight in the top tier of UFC’s heavyweight division. Aspinall appears in a second consecutive headliner in London after wowing the audience his last time out. A Manchester native, he started out in grappling before moving to boxing and then finding MMA in 2019. He fought twice in MMA, finishing his opponents in just over two minutes combined, before he got the UFC deal, and then he debuted in the promotion by knocking out Jake Collier and Alan Baudot in the first round. He submitted Andrei Arlovski in the second round after learning his striking was not enough and taking the fight to the ground. He beat Sergey Spivak in quick fashion and got that headline date in March against Alexander Volkov. Once Aspinall broke out his wrestling, it took him just under four minutes to finish Volkov with a straight armbar. Now it’s time for Blaydes to see if he can find a flaw in Aspinall’s approach.

Blaydes has tons of power and talent, so it has been frustrating to see him fail to move to the top of the contender heap in this division. His approach has been to grind his opponents down through sheer damage, and the only fighter who has really made him look silly is Francis Ngannou, who forced a doctor stoppage in Blaydes’s promotional debut and then knocking him out just 45 seconds into their rematch. His 2020 win over Junior dos Santos showed improvement in his striking, as he was ahead on the cards but then put things away with a knockout in the second round. He was way ahead on the cards in a main event against Derrick Lewis but decided to go for a takedown, and Lewis countered with an uppercut that knocked Blaydes out. That is Blaydes’ flaw: he can get ahead in points but then eat a big bomb that stops his fight. Aspinall has knockout power, so he could get through Blaydes’ defenses. If Blaydes can get the fight to the ground, things should go his way, because we haven’t seen Aspinall tested in terms of cardio, except for a mildly disappointing level of stamina against Arlovski. This is an even fight, so I’m going with the value and the experience.

Jack Hermansson (22-7, 9-5 UFC, -115) vs Chris Curtis (29-8, 3-0 UFC, -105) is an important fight for Hermansson. His UFC journey has been interesting, as his striking was uneven early, and then he became a ground-and-pound fighter. In 2019, he submitted David Branch in less than a minute and then beat Ronaldo Souza in a main event less than a month later. That gave him a headliner with Jared Cannonier that started promisingly before Cannonier finished him in the second round. Hermansson has settled in at a spot just below the middleweight elite, as he has been able to roll over Edmen Shahbazyan and Kelvin Gastelum, but the likes of Sean Strickland and Marvin Vettori have been beyond his capability.

Curtis earned a contract after winning on the Contender Series, but UFC gave him a snub, so he kept fighting as often as he could, and finally he got a UFC chance late in 2021 as an injury replacement. Since then, he has beaten Phil Hawes, Brendan Allen and Rodolfo Vieira. His defense is solid, and he takes the opportunities that opponents give him. He likes to get inside and break down the body, and the risk is that he will stay too cautious and leave points on the table. Hermansson could struggle here, because Curtis does not have any flaws to exploit, but neither does Hermansson. I think Hermansson finds ways to bring in a takedown or two here and there and build up points.