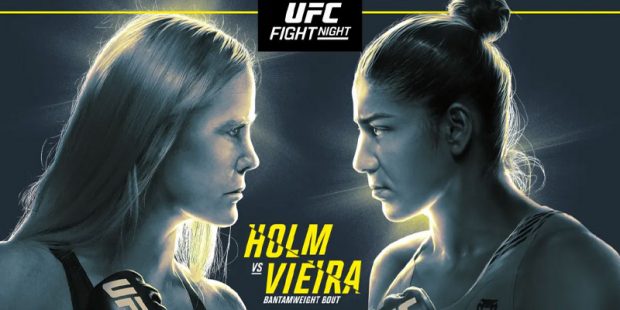 This Saturday’s installment of UFC will once again come from the UFC Apex facility in Las Vegas. Holly “The Preacher’s Daughter” Holm, the former UFC Women’s Bantamweight Champion, will meet Ketlen Vieira in a bantamweight tilt in the main event. The co-headliner is a welterweight bout between Santiago Ponzinibbio and Michel Pereira. The whole night’s action will be available on ESPN+. Read on for the full fight card, along with our online UFC betting predictions for the top two fights.

Holly Holm (14-5, 7-5 UFC, -240) vs Ketlen Vieira (12-2, 6-2 UFC, +195) could be Holm’s opening for a crack at the UFC Women’s Bantamweight Championship, now that Julianna Pena beat Amanda Nunes to take it away. Holm’s last fight was a 2020 victory over Irene Aldama, and thanks to her boxing accomplishments and that 2015 KO of Ronda Rousey that sent what had looked like an invincible career into the dumpster. Holm continues to draw attention from that fight, but she has not kept up that knockout power. Now, she tries to neutralize her opponents, relying on her ability to get away. She can also take opponents to the floor and grind out ho-hum wins; her wrestling game has improved to help her beat Aldana as well as Megan Anderson. Holm is now 40, and it has been more than a year and a half since she last fought, so it is worth asking if she has slowed down.

Vieira came into UFC in 2016 as an unbeaten prospect, and while questions emerged about her style, she answered them by winning her first four fights in the promotion, thanks to her ability to bully opponents into submission. She ground out a victory over Cat Zingano in 2018, which seemed to set her on the path to a title fight, but then she had a rough 2 ½ years. Injuries kept her out of the cage except for one fight against Aldana in 2019 – and Aldana got revenge with a knockout. She returned in early 2021, losing to Yana Kunitskaya on the cards, but then she beat Miesha Tate on points in November, in a main event. For now, though, Holm is the smart pick despite the lack of value.

Michel Pereira (27-11, 5-2 UFC, -120) vs Santiago Ponzinibbio (28-5, 10-4 UFC, +100) is Pereira’s latest step on the path to title contention. Pereira has been an entertainer since coming into UFC in 2019, primarily for the use of flips and acrobatic swings that looked great – but did not always land. He knocked out Danny Roberts in his debut, but then he ran out of gas in a bad loss to Tristan Connelly, and an illegal knee led to a DQ against Diego Sanchez. It was then that Pereira started to fight intelligently, turning his athleticism into fuel for patience, and a four-fight winning streak has earned him a fight against a ranked opponent for the first time.

Ponzinibbio picked up a huge win in 2018 when he knocked out Neil Magny to make it seven wins in a row. However, he has suffered from infections since then, leaving him out of the cage for two years. He came back in January 2021 and got pounded by Jingliang Li. He came back to beat Miguel Baeza in a war of attrition, but then he could not land anything against Geoff Neal. Ponzinibbio is a persistent fighter, but Pereira should be able to stack up the points, if not knock him out before things end. I’m kind of surprised that the line is as even as it is, so I’d put action on Pereira before the numbers move.