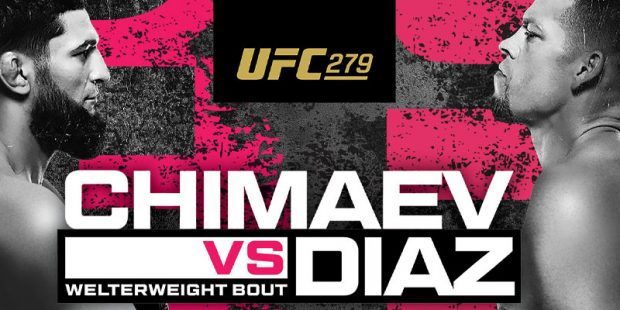 UFC heads back to Las Vegas this Saturday night, as former UFC Lightweight Championship challenger Nate Diaz will face Khamzat Chimaev in a welterweight fight in the main event. Li Jingliang and Tony Ferguson meet in another welterweight bout in the co-headliner. You can catch the action from T-Mobile Arena on pay per view, with the preliminary card on ESPN / ESPN+ and the early prelims on ESPN+ and UFC Fight Pass. We have all the fights listed for you as well as a UFC betting prediction for each of the two matchups atop the card.

Khamzat Chimaev (11-0, 5-0 UFC, -975) vs Nate Diaz (20-13, 15-11 UFC, +675) has a wide variance in odds for a main event, but this is a special setup for what is likely Nate Diaz’s last fight in UFC. He joined the promotion in 2007 and has had a 15-year run that has been legendary. Even his losses have not been the sort that lead to dismissal from UFC, because his fights have always been controlled. He got a title shot in 2012 against Benson Henderson, but after he lost, his motivation dwindled a bit until a December 2015 win over Michael Johnson. After that, he called out Conor McGregor and got a fight with the UFC phenom after Rafael dos Anjos broke his foot, and Diaz cashed in with a major upset win. McGregor won the rematch, but Diaz now had clout. Almost three years later, Diaz returned to beat Anthony Pettis. Since then, he has only fought twice (both losses), a cut stoppage against Jorge Masvidal and a decision loss against Leon Edwards that almost went Diaz’s way in the fifth round, as he got to the verge of finishing his opponent.

Chimaev made his UFC debut in the summer of 2020, taking a fight on late notice and running over John Phillips. Just 10 days later, he beat Rhys McKee emphatically, and it was fewer than two months after that when he needed just 17 seconds to knock out Gerald Meerschaert. His rapid ascent was almost stopped by COVID-19, which kept him out of the Octagon for more than a year, during which time he retired – and then quickly unretired. Near the end of 2021, he finished Jingliang Li in the first round, and for the third straight fight in which he did not take a single strike. His last fight, in April, was a win over Gilbert Burns, his toughest fight yet. The bout went three rounds, and Chimaev had the cardio to last all the way through. We haven’t seen him in a five-round fight yet, but it would be surprising to see this fight go that long, as Chimaev should be able to bring plenty of pain early. If Diaz delivered a submission, that would just add to his legend, but that isn’t a smart pick.

Jingliang Li (19-7, 11-5 UFC, -300) vs Tony Ferguson (25-7, 15-5 UFC, +250) was a bit of a surprise replacement for the co-headliner. Ferguson started out in UFC slowly but after 2013, things took off. He put together a 12-fight winning streak, but he never could get himself into a title fight, and Conor McGregor’s dance with UFC kept everyone else waiting. He was supposed to meet Khabib Nurmagomedov six different times, but each scheduled bout fell through, most recently due to COVID-19. Ferguson was on the first post-COVID card, taking on Justin Gaethje for the interim title, but Gaethje delivered such a beating that the fight was stopped in the fifth round, and Ferguson was seen as past his prime. Losses to Charles Oliveira, Beneil Dariush and Michael Chandler all provided harsh lessons – and now he has moved to welterweight.

Ferguson’s first welterweight clash is against Jingliang Li, who brought a decent wrestling game to UFC but needed to add striking to his game to be competitive. When he has to deal with larger welterweights, like Chimaev or Neil Magny, he struggles, but against the smaller ones, he can deliver knockouts despite the fact that he tends to start slowly. Li is not the sort of wrestler that can give Ferguson problems at this point, and Ferguson should be able to seize the early rhythm. However, Ferguson’s durability has diminished over time, and he is vulnerable to the knockout.