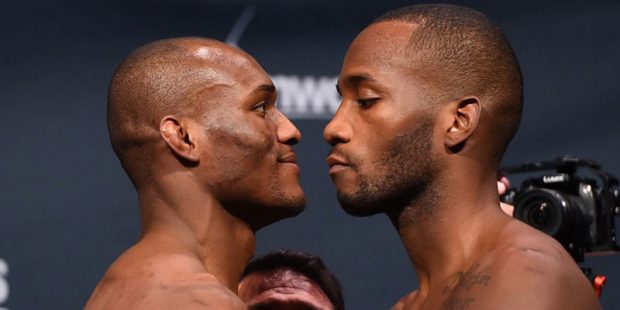 Vivint Arena in Salt Lake City, Utah, is the site of this week’s UFC extravaganza. The main event for UFC 278 features Kamaru Usman defending his UFC Welterweight Championship belt against Leon Edwards. This is a rematch of the pair’s fight on UFC on FOX: dos Anjos vs Cowboy 2, back in December 2015, when Usman prevailed via unanimous decision. Luke Rockhold meets Paulo Costa in a middleweight bout in the co-main event. We have the full fight card for you, as well as UFC betting predictions for the two fights at the top.

Kamaru Usman (20-1, 15-0 UFC, -340) vs Leon Edwards (19-3, 11-2 UFC, +280) looks to be the latest installment in Usman’s run of dominance in UFC. “The Nigerian Nightmare” came into UFC in 2015 with a wrestling game that was already elite, helping him cruise to wins over Edwards and Sean Strickland. Since then, he has worked to improve his striking game, and his highlight-reel knockout of Sergio Moraes showed that he has added plenty of power in that area as well. Usman took the title away from Tyron Woodley in 2019, using his wrestling to leverage the win, but in his first defense, he dismantled Colby Covington with his striking, delivering a knockout in the match’s final minute. He ground out a decision victory over Jorge Masvidal and knocked out Gilbert Burns in subsequent tidal defenses, and then he knocked out Masvidal and Covington in rematches. If Usman has a weakness, it is that he is still not as natural a striker as he is a wrestler.

Edwards was still a developing fighter when he met Usman back in 2015. He started slowly in UFC, losing his debut to Claudio Silva on the cards, but then he knocked out Seth Baczynski in just eight seconds. His approach has been wrestling-heavy, which did not help against Usman but has given him a 10-fight winning streak since that setback. His first main event came in 2018 and featured a win over Donald “Cowboy” Cerrone. Wins over Gunnar Nelson and Rafael dos Anjos added momentum, but it seems like his major wins have also come with caveats, with fans looking for even more energy. His style has become more and more cautious over the years, which means his pace stays slow. This should make him an easy target for Usman. Edwards does have knockout power, but it’s unlikely that he will leave himself vulnerable with a big bomb. Usman should stack up enough points to win this easily.

Paulo Costa (13-2, 5-2 UFC, -295) vs Luke Rockhold (16-5, 6-4 UFC, +245) is the next step in Paulo Costa’s long road back to title contention. He started in UFC with big wins over Uriah Hall and Yoel Romero, but his title shot against Israel Adesanya was weird. Costa had been aggressive in his early fights, but he came in looking hesitant, and Adesanya picked him apart before knocking him out in the second round. He backed out of several fights after that before taking on Marvin Vettori in October. Costa’s weight was so far over that the bout ended up being a light heavyweight tilt. Costa kept up with Vettori but looked tired in a decision loss.

Luke Rockhold is another star-crossed middleweight. He won the belt from Chris Weidman in 2015, and his large frame gave him the ability to strike from more range than many of his competitors. However, his first title defense came against Michael Bisping, whom Rockhold had easily beaten just 19 months before. Bisping knocked Rockhold out in the first round, showing subsequent fighters that Rockhold’s chin was a promising target. Since then, Rockhold has struggled, taking a long time off before beating David Branch in a ground-and-pound stoppage. Rockhold picked Romero apart from range in their fight, but when Romero brought pressure in the third round, things ended in a brutal knockout. Rockhold came back in 2019 looking to fight at light heavyweight, but he got knocked out by Jan Blachowicz in the second round – and then he retired. He came back to the cage but backed out of a matchup in 2021. He has now gone three years since his last fight, so his durability is a major question.