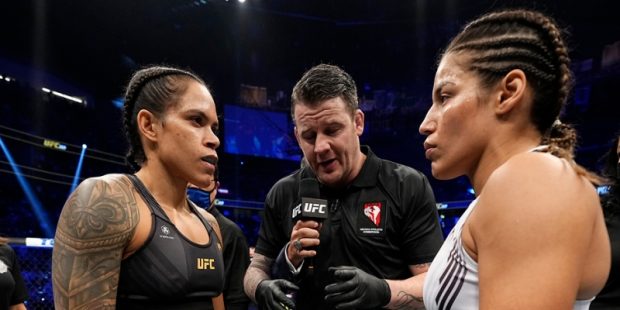 This weekend, UFC heads to Texas as the American Airlines Center in Dallas will host a UFC Women’s Bantamweight Championship rematch between Julianna Pena, the current champ, and former champ Amanda Nunes, who is still the UFC Women’s Featherweight Champion. This is a rematch of the duo’s headliner at UFC 269, when Pena took the title by submission in the second round, one of the more shocking UFC upsets in recent years. The co-main event is an interim UFC Flyweight Championship bout between Kai Kara-France and former champ Brandon Moreno. These two fought at UFC 245, and Moreno won unanimously on the cards. We have the complete fight card and UFC betting predictions for the two championship fights.

Julianna Pena (11-4, 7-2 UFC, +230) vs Amanda Nunes (21-5, 14-2 UFC, -275) is Nunes’ shot at undoing the major upset from last year. Pena had not been an exciting prospect for a while; since she came back from pregnancy in 2019, she showed very little of the aggression that had marked her style before her time away, and she only had won one fight before getting the title shot. However, Pena has durability, while Nunes tends to run out of gas, so Pena’s shot was to absorb damage until Nunes tired. The first round was all Nunes, as she almost finished Pena several times and was way ahead on the cards. However, that one round wore Nunes out, and she had little to offer in terms of resistance as Pena worked toward a submission. Is Nunes really that limited in terms of cardio? That is the biggest question for this fight. It is worth noting that this was Nunes’ first cut down to 135 pounds in almost two years after defending her UFC Women’s Featherweight belt, and she had also fought COVID-19 in 2021. It is also possible that she might overreact, as she did in a rematch with Valentina Shevchenko in 2017. In that fight, she was so cautious that she was almost completely ineffective. A Pena win would not be the surprise it was last year, but Nunes has so much more skill and brings so much more punishment that she is still the smart pick.

Brandon Moreno (19-6-2, 7-3-2 UFC, -210) vs Kai Kara-France (24-9, 7-2 UFC, +180) is an interim fight designed to help shake out a confusing set of rankings atop the UFC Flyweight division. When Moreno beat Kara-France in 2019, the entertainment showed that the flyweight division was back. Moreno had just come back to UFC a fight before his fight with Kara-France, and that fight was a draw against Askar Askarov. Beating Kara-France helped Moreno emerge in UFC. He made a run up the flyweight ladder and met Sergio Pettis in a headliner. In that fight, Moreno brought striking in volume, but Pettis found holes in his defense and beat him. Alexandre Pantoja used a similar approach to send Moreno briefly out of UFC. When he came back, though, Moreno showed a new durability that meant he didn’t have to finish opponents to win, and he emerged as the top contender. He met Deiveson Figueiredo for the title, and they drew in their first meeting. That led to a trilogy that lasted three years and ended with Moreno’s win in the second bout. Figueiredo won the third bout but is now hurt, and so he cannot defend his title, UFC devised this interim fight.

Kara-France has a lot of knockout power for the flyweight division, and he showed it quickly after arriving at UFC in 2018. He had a difficult time emerging from a division rich in athletes, as he struggled against fighters who were faster and brought pressure. He turned a corner in 2021, as he found his knockout power once again, finishing Rogerio Bontorin and Cody Garbrandt. When he beat Askarov in March, his style came together, as he held off Askarov’s wrestling attacks, got back upright and shut Askarov down. Moreno has as much aggression as Askarov, but he has a more varied approach, which will make things tougher fo Kara-France. Because of that versatility, I’m going with the favorite.