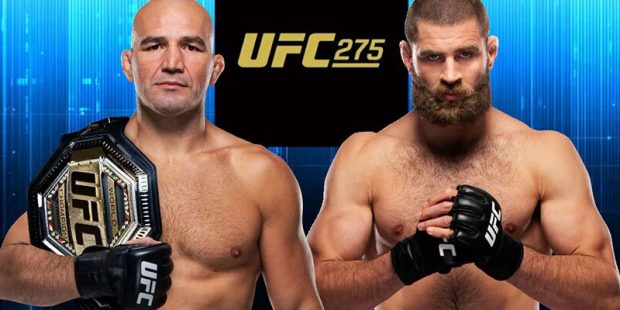 UFC heads to Asia this weekend as the Singapore Indoor Stadium will host UFC 275. The main event is Glover Teixeira’s defense of his UFC Light Heavyweight Championship against Jiri Prochazka, the onetime light heavyweight champ in the Rizin promotion. The co-headliner is the UFC Women’s Flyweight Championship, with Valentina Shevchenko defending her belt against Taila Santos. Don’t miss the full fight card along with our UFC betting predictions on both of the championship fights.

Glover Teixeira (33-7, 16-5 UFC, +170) vs Jiri Prochazka (28-3-1, 2-0 UFC, -200) is Teixeira’s shot at becoming the oldest title holder to defend a first-time belt, at the age of 43. He entered UFC in 2012, when he was already 33, but he came in swinging and got a title fight in two years – but lost to Jon Jones in 2014 on the cards. He had a bit of a down stretch, with losses to Anthony Johnson, Alexander Gustafsson and Corey Anderson, but then he flipped a switch in 2019 and started to win again. He started putting together some wins against new fighters, earning a main event slot against Anthony Smith in 2020. He ground out that win, which started slowly for him but ended up becoming such a rout that he was knocking out Smith’s teeth. Jones vacated the belt, and Teixeira absorbed tons of punishment from Thiago Santos before breaking him and submitting. He beat Jan Blachowicz for the title in October, using his wrestling from the start and driving the pace the whole way, winning via submission in th second round.

Next up is a defense against Prochazka. His athleticism is elite, and his frame is sizable enough to absorb punishment, but he also has fluid motion that makes him elusive. However, his defensive instincts are far from ideal, which means that Teixeira could deliver some punishment. With Rizin, he primarily fought opponents on the downhill side of their careers, but when he came to UFC, his wins over Volkan Oezdemir and Dominik Reyes made him a contender immediately. Prochazka’s instincts on the floor are dangerous – to himself, as he might end up in the wrong position in a matter of seconds. Teixeira will have to track Prochazka down and then turn any moment of success into a finish. I’m going with the value here because it seems quite even.

Valentina Shevchenko (22-3, 11-2 UFC, -630) vs Taila Santos (19-1, 4-1 UFC, +450) is the latest women’s flyweight defense by a fighter who seems unstoppable in Shevchenko. When she came to UFC, the weight class did not yet exist, and she fought at 135 pounds. The only bantamweight who could beat her was Amanda Nunes, although both of those fights were close on the cards. Shevchenko is cautious and likes to hang back, so the volume of strikes is often low. Her best fighting comes on the floor, wrestling and in the clinch. So far,as a flyweight, Shevchenko has moved through the competition like a buzzsaw. Katlyn Chookagian, Jessica Andrade and Lauren Murphy have all tried to take the belt away, only to get beaten badly. With more young talent on the way, Shevchenko will lose at some point, but will it be this weekend?

Santos only lost one fight in UFC – her debut against Mara Romero Borella in 2019. She was a physical opponent who could hold Santos in check. Since then, Santos has won four in a row, including a submission of Joanne Wood in the first round in November. Santos’ wins have come against fighters who have more technique than physicality, but Shevchenko’s athleticism is elite. This feels early for Santos, so I’m going with the champ.