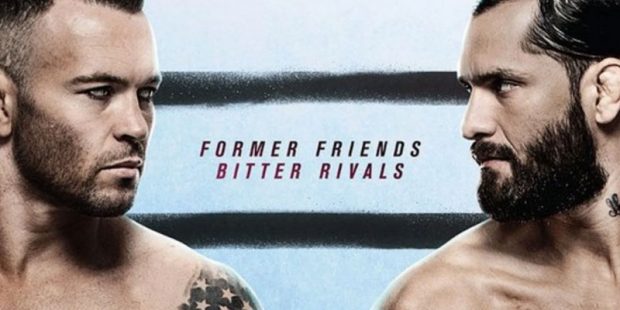 T-Mobile Arena in Las Vegas is the site for this week’s installment of UFC, as Colby Covington and Jorge Masvidal will square off in the welterweight bout that serves as a makeup headliner. Two championship fights were supposed to take place at UFC 272, as Aljamain Sterling was scheduled to fight a title unification rematch with Petr Yan for the UFC Bantamweight belt, but this has been moved to UFC 273. Alexander Volkanovski was supposed to defend his UFC Featherweight Championship in a trilogy bout with Max Holloway, but Holloway had to withdraw due to injury, and he has been replaced by Chan Sung Jung, with the bout also moved to UFC 273. For this weekend, the co-main event is a catchweight bout between Renato Carneiro and Rafael dos Anjos. Don’t miss the full fight card and our predictions for your UFC Odds on the top two matchups.

is the renewal of one of UFC’s great grudge matches. Masvidal has gone back and forth in the promotion, at times moving to contender status and then at times losing fights because he would lose interest after landing some strikes. In 2019, though, he went through a bit of a rebirth, with a new commitment to doing damage whenever the opportunity presents itself. He knocked out Darren Till in the second round and followed that up with a five-second knockout of Ben Askren using a flying knee. He beat Nate Diaz in a headliner at Madison Square Garden, making him the top contender against Kamaru Usman. Their first fight was fairly dull, with Usman grinding out a victory on the cards. Masvidal lost a rematch via a fairly vivid knockout in the second round. He could definitely use a win against Covington to keep himself relevant for headliners.

Covington built a reputation based on wrestling strength, winning seven of his first eight fights in the promotion. Then he faced Demian Maia in Brazil, another skilled wrestler, which forced Covington to stay upright, and he showed himself able to deliver plenty of volume without wearing down. Going outside the Octagon, Covington used some hate-filled xenophobia in his press conferences to build interest, making his fights with Kamaru Usman even bigger from an emotional standpoint in response. The African immigrant has beaten Covington twice now, as Covington will stand and fight and can deliver volume but does not have the knockout punch, and so he can be overwhelmed; Usman ended up breaking his jaw in their second fight. Covington has the durability to beat Masvidal on his feet – if he can absorb the damage that he would take. Masvidal should work to keep the fight off the mat, and if he can, then he should win this. This is Covington’s fight to win or lose, but Masvidal may be the slightly hungrier of the two. I’m going with the value and with his motivation here.

is the latest installment in a long journey for dos Anjos. He took the UFC lightweight title from Anthony Pettis in 2015 and defended it in just 66 seconds with a win over Donald Cerrone. An injury kept him from facing Conor McGregor, and then he got knocked out in a title defense by Eddie Alvarez. He later moved up to welterweight in 2017, taking down Tarec Saffiedine, Neil Magny and Robbie Lawler, but that was his peak in that division, as he would lose four of five against stronger grapplers. He dropped back to lightweight after a loss to Michael Chiesa in early 2020, but due to COVID-19 and other factors, he only has one fight so far back in this divisions, a win over Paul Felder in November 2020 – and Felder had come out of retirement to keep the fight on the card.

Carneiro comes to this fight on five days’ notice, but he’s used to last-minute surprises, as his UFC debut against Jeremy Stephens in 2017 came at the last second as well. Carneiro used quickness and elusiveness to win on the cards, but in 2019, as he looked to move to featherweight contender status, he got demolished by Jose Aldo and Chan Sung Jung. He moved to lightweight, and he beat Alexander Hernandez only three weeks ago, turning a weak start into an impressive fight, ending things early in the second round. A five-round fight on such short notice makes this a challenge, as does Carneiro’s preference to stay at a distance, while dos Anjos likes to bring pressure.