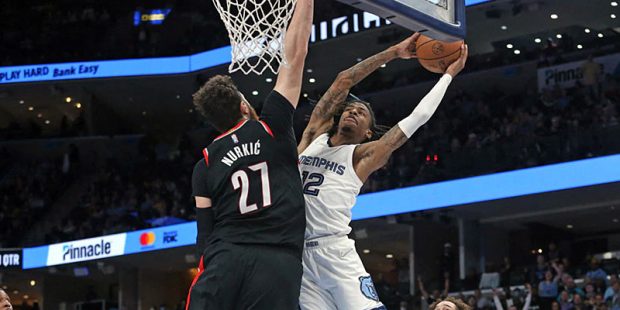 Two NBA contenders may be getting a huge boost as contributors return to the lineup. The Milwaukee Bucks will have center Brook Lopez back on Monday night, as he has recovered from a back injury that sidelined him on the first night of the season. George Hill (neck soreness) has been out for the last 16 games for the Bucks, and he will return as well. In Los Angeles, the Lakers are optimistic that Anthony Davis will return this season, as he is set to start spot shooting on Monday. He has been working to recover from a foot sprain that came less than a month after a 17-game absence due to a sprained MCL. Davis’ return is crucial for a team looking simply to get into the playoffs. So, let’s look at some NBA Odds for this week.

Top Betting Games of the Week

The Southwest Division-leading Memphis Grizzlies continue their road trip on Tuesday night in Indiana. They have won three in a row, including a seven-point win in Oklahoma City on Sunday, a game in which the Grizzlies only trailed for 25 seconds of 48 minutes of game time. The scoring balance was impressive, as seven different players hit double figures. Desmond Bane led the way with 21 points, while Jaren Jackson Jr (18), Ja Morant (17), Dillon Brooks (15), Brandon Clarke (12), Tyus Jones (12) and Ziaire Williams (11) all had plenty of production. This helped the Grizzlies weather 31 points and seven assists from Shai Gilgeous-Alexander and a season-high 29 points and 10 rebounds from Darius Bazley.

The Pacers have lost four out of five and 13 of 17, including a 131-128 loss in Atlanta on Sunday night. The Pacers just had no answer for Trae Young, who had 47 points, including 33 in the first half – and four made shots from the logo at midcourt. Tyrese Haliburton and Buddy Hield each had 25 points for Indiana, and the Pacers fought their way back from an 18-point halftime deficit by going into a box-and-one, keeping Young to just 14 points after the intermission, but the Hawks were able to hold off the comeback. Can the Pacers do better at home?

The Phoenix Suns head to the Crescent City on the momentum of a 140-111 shellacking of the L.A. Lakers on Sunday night. Devin Booker put up 30 points, and Deandre Ayton posted 23 points and 16 boards in only 27 minutes. Booker also chipped in 10 assists and four steals, and Mikal Bridges scored 18. The team set a new season high with 140 points in the game. The Suns came in with plenty of motivation after hearing that Anthony Davis, in a pre-game interview, said that the Lakers would have beaten the Suns in the playoffs last year if he had not had to miss the games with a groin injury. The Suns jumped out to an early 16-6 lead and led by 26 after the first quarter, putting up 48 in the period – the most the Lakers have ever permitted in one quarter in the shot-clock era. Phoenix had 14 assists without a turnover in the quarter, while the Lakers turned the ball over seven times and clanked nine of ten three-point attempts.

The Pelicans went on a four-game tear after trading for CJ McCollum, beating the Suns, Lakers, Kings and Jazz by no fewer than 15 points in each game. After that came a brutal four-game losing streak that included a 22-point home loss to Charlotte. New Orleans bounced back with a 130-105 win over Houston on Sunday night. Jonas Valanciunas had 32 points and 10 boards, and Jaxson Hayes put up 21 points, and undrafted rookie Jose Alvarado set a career best with six steals, along with 16 points and 10 assists. With McCollum in the NBA’s health and safety protocols, the rest of the team will have to step up. Can they get a second straight win over Phoenix?