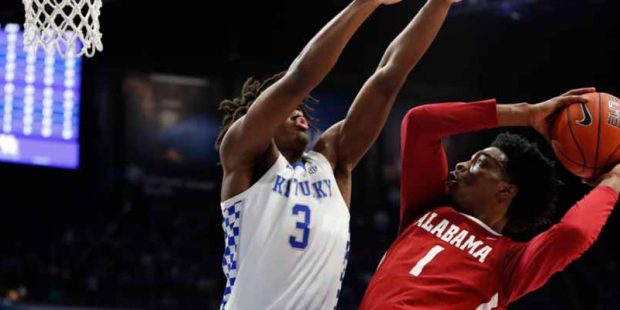 Last Tuesday, Arizona visited UCLA and got punched in the mouth, as the Bruins led wire to wire in a surprising rout. The Bruins headed to Arizona for the other leg in their Pac-12 series on Thursday, and the Wildcats returned the favor with an emphatic victory. Arizona’s offense fired on all pistons in the first half, going into the locker room with a 42-30 lead. The Bruins’ defense stood tall in the second half, but Kerr Kriisa, who had gone 0 for 12 when the teams met in Los Angeles, punctuated a 16-point night with a three-ball with two minutes left in regulation, keeping the Wildcats far enough ahead to secure what would become a 76-66 win. Arizona led by as many as 17 in the second half.

What games should you include in your online college basketball betting for the weekend? Take a look.

Saturday, February 5 | 2:00 pm ET, ESPN
Since losing at Kansas State, the Red Raiders have won four of five, with the lone loss coming in overtime at Kansas. Since that setback, Texas Tech has routed Mississippi State at home and beaten Texas by 13 in Chris Beard’s return to Lubbock. In that game, Kevin Obanor put up 17 points, knocking down five three-pointers. Kevin McCullar had 19 points, making 12 of his 15 free throws. Bryson Williams (16) and Davion Warren (10) also hit double figures in points. The atmosphere was raucous on a night when fans wanted to let their former coach hear their displeasure.

The Red Raiders’ next test takes them to one of basketball’s most difficult road environments as they head to West Virginia. The Mountaineers are in free fall right now, although they almost ended a five-game losing streak at #8 Baylor on Monday. They ended up falling, 81-77, after they had to finish the game without star guard Taz Sherman, who got hit in the head by Baylor’s Jeremy Sochan. Sherman had 29 points, including six three-pointers, and he was key to the Mountaineers taking an eight-point lead into the locker room at halftime. Sherman did post a thumbs-up from his Twitter account after the game, so expect him to play on Saturday. Sean McNeil chipped in 16 points. Can the Mountaineers play that well again against the Red Raiders – who beat West Virginia in Lubbock? I say yes, but I don’t think it will be enough to get the straight up win.

Saturday, February 5 | 8:00 pm ET, ESPN
How did Kentucky deal with that nine-point loss at Auburn? They went on a three-game winning streak that started with an eight-point home win over Mississippi State, continued with an 18-point demolition of Kansas on the road and now has featured a seven-point win over Vanderbilt. Davion Mintz came off the bench to score a season-best 21 points and nailed a three-ball during an important 11-2 run, in a game that saw Kentucky try to give back a double-digit lead before collecting its collective composure. Oscar Tshiebwe had 11 points and 17 rebounds in the chippy win.

The last three games have shown us the contradictions inherent to Alabama’s basketball season: a loss at SEC bottom-feeder Georgia, a win over then-#4 Baylor, and a 19-point beating at the hands of top-ranked Auburn. Jaden Shackelford was the Crimson Tide’s top scorer with 26 points, and Jahvon Quinerly, who looked NBA-ready against Baylor, also chipped in 20. Alabama tried to make a couple of runs, such as a string of three straight three-pointers to turn a 19-point deficit into a 14-point gap at the half, but the Tide never could catch up. That iffy interior defense doomed the Tide once again. Can they flip the script against Kentucky?