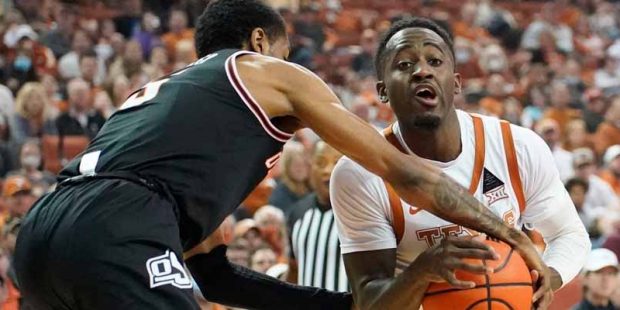 If you look at the college basketball power rankings, Gonzaga has made its way back to the top after Auburn’s loss last week. Some of this has to do with the fact that Gonzaga has gone 10-0 in West Coast Conference play, with an average margin of victory of 30.1 points. No game has been closer than 16, but we’ve seen this before, where Gonzaga skates through WCC play and then has a hard time getting through March Madness. Some bracketologists have four WCC teams getting into the NCAA tournament, but even so, that conference slate does not seem like the best preparation for the rigors of the national tournament. Teams who come out of one of the Power 5 conferences seem to have better preparation, due to the superior competition, for the six-game gauntlet.

As you consider your college basketball betting for this week, let’s look at some top choices.

Tuesday, February 15 | 7:00 pm ET, ESPN2
Since that big loss at Texas Tech back on the first, the Texas Longhorns knocked off then-#20 Iowa State and then-#8 Kansas, both at home. However, they went to then-#10 Baylor on Saturday and took an 80-63 whipping at the hands of the Bears. The biggest news from the game was the Bears losing big man Jonathan Tchamwa Tchatchoua to a knee injury. Even without their center, the Longhorns suffered their worst loss under first-year coach Chris Beard. They just beat Kansas at home five days prior, but the Longhorns could not buy a basket, shooting just 32.8 percent from the floor, and Andrew Jones was the team’s leading scorer with just 11 points. Five other Longhorns had eight points in the loss.

Next up is a trip to Norman to take on the Oklahoma Sooners, who come in at just 14-11, but their last two games have been dangerous. They beat then-#9 Texas Tech by 15 at home on Wednesday and went to Kansas on Saturday and just lost by two. The Sooners looked like they would snag the road win before a late 15-2 run by Kansas. Jordan Goldwire had a chance to sink a late game-winner but had his jumper clank off the rim. He led the Sooners with 20 points, and Tanner Groves added 19, making four of his first eight shots from downtown but then he ended up missing his last three. Elijah Harless had a dozen points, and Jalen Hill chipped in 10. Can the Sooners frustrate the Longhorns at home?

Tuesday, February 15 | 8:00 pm ET, CBS Sports
Villanova has won three in a row and six of seven coming into their showdown at Providence. Their three wins have come over Connecticut at home, St. John’s on the road and Seton Hall at home. In that win over Seton Hall, Justin Moore and Collin Gillespie both overcame ankle injuries. Moore put up 16 points, 14 after halftime, and Gillespie pulled down a huge offensive board in the last minute, as Villanova came back from seven points down to win by six. Jermaine Samuels had 16 points, and Brandon Slater had 10 points, including the layup to give the Wildcats the lead with 1:26 left in regulation. Can they gut out another win against the Friars on the road?
Providence (21-2) has not lost since a 32-point shellacking at Marquette on January 4. They had three games postponed due to COVID-19, but they still have a six-game winning streak coming into Tuesday night. Their last game came at home on Saturday, when they barely escaped DePaul, 76-73, in overtime. DePaul built a 13-point lead in the second half and also made overtime interesting. However, DePaul only managed one basket in the last 5:12 of regulation, and that basket came with 20.3 seconds left to force overtime. Nate Watson had 16 points and seven boards for the Friars, and Al Durham was a perfect 12 of 12 from the free-throw line to keep the Friars close. How will the Friars do when a ranked team shows up, though?