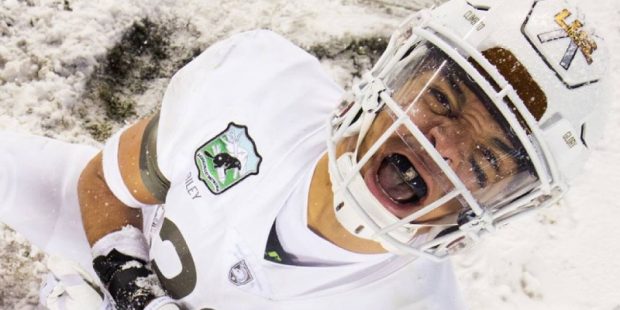 ACC commissioner Jim Phillips had some interesting comments on Wednesday at the conference’s yearly kickoff events, indicating that all options are open to him when it comes to decreasing the revenue gap that the ACC faces compared to the Big Ten and the SEC. He also noted that the changes in college football could harm collegiate athletics as a whole. He opined, “We are not the professional ranks. This is not the NFL or NBA light. We remain competitive with one another, but this is not – and should not be – a winner-take-all or zero-sum structure.” In 2020-21, the ACC made a record $578 million in revenue, giving out about $36.1 million to each full member. The next TV deal for the Big Ten could give each school twice that amount, if not more. Of course, Phillips argued against the 12-team college football playoff scenario when it was floated, a solution that likely would have avoided the current chaos in collegiate sports, so it is ironic to see him talking about some sort of amateur utopia that college sports used to inhabit. Let’s look at the preseason top 25 in college football as well as some observations that you could use in your College Football online betting.

Tennessee just received official notice from the NCAA of allegations of 18 Level I violations (the most severe). Former head coach Jeremy Pruitt, his wife, assistant coaches and other people connected to the school provided about $60,000 in cash and gifts to players and their families. Pruitt also stands accused of failure to promote an atmosphere of compliance and monitor his staff between 2018 and 2021, and the university stands accused of failure to monitor the school’s recruiting plans. Tennessee had led an inquiry that ended in Pruitt’s firing in January 2021, and the school reported the violations at that time. Of the money, $15,000 in car payments and rent went to one player over 2 ½ years. Given the flood of money going to players through NIL deals, discipline over this dollar amount seems a little ironic, but the Volunteers look like they will have upcoming scholarship restrictions and a bowl ban.

The ACC may not be as tough a conference as the Big Ten or the SEC, but it is a league that is rich in quarterbacks. Miami has Tyler Van Dyke, who threw for 25 touchdown passes to earn conference Rookie of the Year honors in 2021 – and he didn’t become the starter until the end of September. He had six consecutive games with at least 300 passing yards and three touchdowns. The last Power Five quarterback to have that sort of streak was a guy named Joe Burrow, who won the Heisman Trophy and the national championship in 2019.

Devin Leary had a 35:5 TD:INT ratio last year, and he was particularly solid in the red zone and on third down. He gets another year working with Tim Beck’s offense, so he should be even more dangerous for N.C. State this time around.

D.J. Uiagalelei has a difficult situation, playing under extremely high expectations at Clemson. He had two terrific starts in 2020 against Notre Dame and BC, but last year he plummeted to the bottom of the ACC in passer rating and posted an unsightly 9:10 TD:INT ratio. He learned his lesson, dropping a lot of weight and putting in time on his mechanics, so he could be ready to star once again.