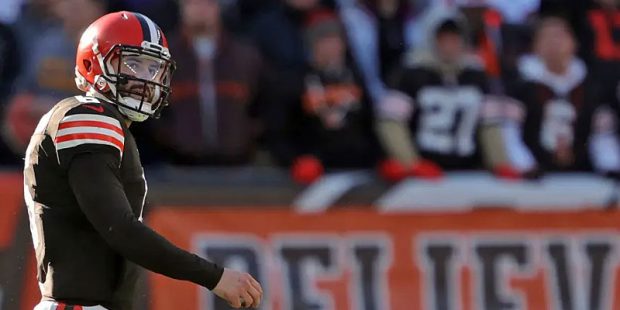 The Cleveland Browns made headlines by excusing quarterback Baker Mayfield from the team’s mandatory minicamp in what the team described as a “mutual decision.” Mayfield is in Texas, rehabbing his non-throwing shoulder after surgery to repair a torn labrum. Playing through that injury did not pay off for Mayfield last season, as the Browns struggled to an 8-9 record despite having a defense that stopped teams time and time again. The Browns are in hot water at quarterback, though, as presumed starter Deshaun Watson could face a lengthy suspension and the backup quarterback is Jacoby Brissett. Tedy Bruschi gave a spirited interview about why the Browns should bring Mayfield back, but the Browns don’t appear to be headed in that direction. Read on for more news that could influence your NFL betting choices.

A team with good news at quarterback is the L.A. Rams. Apparently Matthew Stafford, who did not throw during the team’s offseason program due to a right elbow injury, will “definitely” be ready to pass the ball at training camp. He received an injection in his throwing elbow for an injury that plagued him last season, and he participated in team drills but has not thrown the football during this week’s minicamp. In an interview, Stafford said, “I’m progressing kind of into that and through [being able to throw] at the moment…I’m just trying to make sure we’re smart, but at the same [time] be as ready to go as I can possibly be come Day 1 when we’re out there throwing the ball around.” The Rams would definitely like to see the quarterback who led them to a Super Bowl title lead them onto the field in the season opener, and this news is a welcome step toward that goal.

Another key offensive star who looks to be all set for 2022 after extended absences due to injury is Saquon Barkley of the N.Y. Giants. He tore his right ACL and meniscus, ending his 2020 season, and he struggled last year, as recovering from the injury sapped his confidence. After three seasons plagued with injuries, though, Barkley feels ready. He comes into 2022 ready to play the fifth-year option on his rookie deal. He has fallen a long way since he gained 2,028 all-purpose yards in his rookie season; a lucrative extension seemed imminent. However, in the last three seasons, he has picked up 2,391 yards combined. An ankle ailment in 2019, the ACL tear in 2020 and an ankle injury in 2021 have hobbled him, so it will be exciting to see him back at full strength – and with full confidence.

In an interesting leadership move, Dallas Cowboys coach Mike McCarthy has decided to challenge Micah Parsons to “be an elite player.” This is the same Micah Parsons who was the Defensive Rookie of the Year after the 2021 campaign and who was named a first-team All-Pro. In the off-season, he has stepped into the limelight, attending Dallas Stars and Dallas Mavericks games, throwing out the first pitch for the Texas Rangers, and then going backstage after Errol Spence Jr’s welterweight title bout at AT&T Stadium. McCarthy has said that, even though Parsons set a franchise rookie record with 13 sacks last year, he has work to do to become “elite” as far as competition in practice, the weight room and other areas. As Parsons adopts more of a leadership role, he will be expected to speak up and motivate others around him. Given the leadership issues that have plagued the front office and the coaching suite in Dallas for decades, though, it might not make sense to challenge one of the players who did all the right things last season.