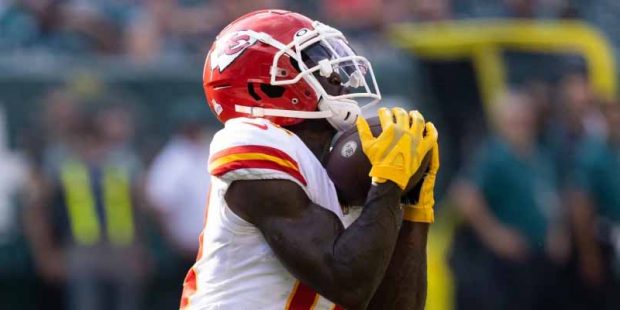 The drama continues to swirl around Deshaun Watson and the Houston Texans, as the four plaintiffs who have not yet settled their lawsuits against him for sexual harassment and/or misconduct have asked the NFL for its documents that it compiled in its investigation of Watson’s conduct. The notice includes intent to conduct depositions in writing and asks for photographs, recorded interviews, witness statements and any other communications. Watson’s hearing with NFL disciplinary officer Sue L. Robinson ended last week, but while she is expected to provide a ruling before the Cleveland Browns open training camp in August, there is no official timeline.

Take a look at some other news items that could influence your online betting on the NFL this fall.

The Kansas City Chiefs attempted to fill the void at wide receiver that Tyreek Hill left when he joined the Miami Dolphins with Marquez Valdes-Scantling, one of two wide receivers to depart the Green Bay Packers in free agency. During off-season practice, Patrick Mahomes connected with Valdes-Scantling frequently, leading to some huge plays. Mahomes said in a press conference that Valdes-Scantling has excelled at learning the Chiefs’ offense and making plays. With the Packers, Valdes-Scantling was the deep threat, averaging 17.5 yards per reception over four seasons, including an average of almost 21 yards per catch in 2020, when he led the NFL in that statistic. If Valdes-Scantling can build confidence and make some plays, the Chiefs might not go through the offensive decline that some have predicted after Hill’s departure.

Despite a fairly thin quarterback class this year, there are four teams that took the plunge by taking a signal-caller in the first three rounds. The Pittsburgh Steelers took Kenny Pickett out of Pitt in the first round. So far, he has gotten third-string reps behind Mitch Trubisky and Mason Rudolph. Trubisky has looked confident in workouts so far, and he has built a rapport with the locker room that establishes him as a leader. For now, Trubisky looks like the Week 1 starer, although the limits of his game in Chicago still show that Trubisky might just be a placeholder while the team develops Pickett.

The Atlanta Falcons took Desmond Ridderin the third round out of Cincinnati. The other quarterback in camp is Marcus Mariota, whom the Falcons brought in from Las Vegas to start, at least over the short term. Mariota has looked solid during OTAs. If Mariota plays well all season and the Falcons play well enough to sniff the playoffs, then Ridder will wait for his debut. If Mariota struggles, though, the Falcons will see if Ridder can have better luck against NFL defenses than he had against Alabama in the national semifinal.

Malik Willis, coming out of Liberty, went to Tennessee in the third round, and for now he is behind Ryan Tannehill. Willis is getting development in calling plays in the huddle and taking snaps from under center. The coaching staff has also worked with Willis to adjust his mechanics so that his accuracy can improve. Tannehill is the established quarterback, and he took the Titans to an AFC Championship. The injury to Derrick Henry put more pressure on Tannehill than he has had in prior seasons, but he should bounce back – which means Willis’ path to starter status is a long one.

The Carolina Panthers took Matt Corral out of Ole Miss near the end of the third round, and he might have the strongest arm of any of these four. Corral has a steep learning curve to follow, because the Panthers’ offense is a lot different from what Corral worked with at Ole Miss. The other quarterbacks in camp are Sam Darnold and P.J. Walker. However, the struggles that Darnold has had finding consistency (and the struggles that the Panthers have had bringing Baker Mayfield to town), Corral should get some opportunities to lead the offense.

Odds to Win the Season : Bet the Super Bowl to Win