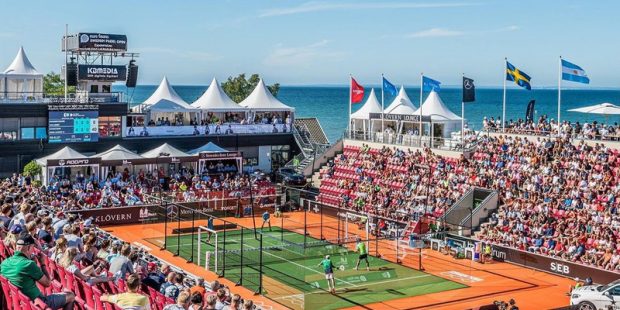 With Wimbledon in the rear view mirror, the next event on the professional tennis schedule is the Swedish Open, also called the Nordrea Open for sponsorship considerations. This is an outdoor tournament on clay, played as part of the 2022 ATP Tour (250 Series) and the WTA 125 tournaments. The women’s bracket was played last week, while the men’s bracket started Monday and concludes Saturday. Let’s take a look at the men’s singles action to this point as well as some tennis betting insights going forward.

In Wednesday’s action, Pablo Carreno Busta (-230) is the favorite to beat Albert Ramos-Vinolas (+175). Ramos-Vinolas does have one clay tournament title this season, but his overall record on the surface is 14-11 in 2022. On clay, he wins 74.4% of service games and 26.9% in return games. With break points, he has won 41.1% of the time on clay. He last appeared at Wimbledon, losing to Casper Ruud (6-7, 6-7, 2-6) in the round of 128. Carreno Busta has an 8-7 record in eight clay tournaments in 2022, winning 76.8% of his service games and 25.5 of his return games on the surface. Carreno Busto also went down in the round of 128 at Wimbledon, but he had to retire after two sets against Dusan Lajovic; the score was 6-3, 4-6 at the time. Carreno Busta looked impressive in his round of 32 match against Stan Wawrinka, winning, 7-5, 6-4. With that solid win over Wawrinka under his belt, Carreno Busta is the smart pick in this match despite the low value.

Diego Schwartzmann (-450) is an even heavier favorite in the round of 16 when he takes on Elias Ymer (+310). Schwartzmann made it to the finals at Rio and Buenos Aires earlier in 2022, and in the clay season in Europe, he advanced to the quarterfinals of the Monte-Carlo Masters and the semifinals of the Barcelona Open. He is looking for some redemption after falling to Liam Broady in five sets at Wimbledon (6-2, 4-6, 0-6, 7-6, 6-1). Ymer has a 7-4 record overall coming into the Nordrea Open, with his best result coming in Pune at the Maharashtra Open, where he fell in the semifinals to Joao Sousa, who would win the tournament. Ymer got into Wimbledon at the last minute after Matteo Berrettini withdrew, but he fell to Cristian Garin (who would advance to the quarterfinals) in the first round. Schwartzmann and Ymer have met twice before; in the 2015 U.S. Open, Schwartzmann beat Ymer in straight sets in the first round, and in the 2021 Australian Open, they met in the first round again, with Schwartzmann advancing in four sets. The smart pick for this match is Schwartzmann.

Dominic Thiem (+235) comes in as the underdog against Roberto Bautista Agut (-320) in the round of 16. Thiem has not fared well on clay this year, with his win over Emil Ruusuvuori in the first round becoming his first victory on the surface in 2022, after six consecutive losses. Bautista Agut has won 83.3% of his service games and 33.3% of his return games on clay, compared to a 76.5% service game and 4.3% return game winning percentage. Thiem has played much better on hardcourt surfaces than he has on clay. Because of the surface, the smart pick is Bautista Agut to win.