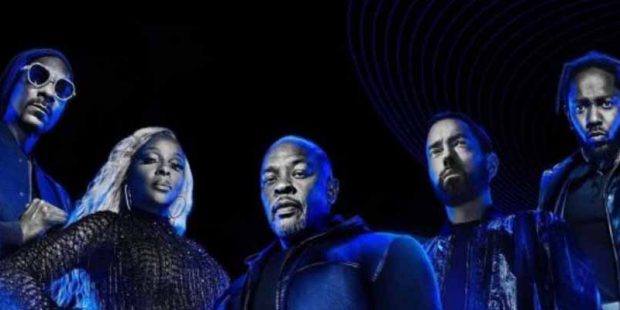 The halftime show for Super Bowl LVI is aimed at the somewhat older viewer, as Dr. Dre, Eminem, Snoop Dogg, Mary J Blige and Kendrick Lamar are all slated to perform. As usual, you can find a number of sports betting opportunities on the show alone, as many halftime prop bets are available. Such wagers as the number of songs, which song will start the performance, whether a wardrobe malfunction will take place, are back on the board, along with some props specific to the artists themselves. Take a look as you plan out the fun NFL wagers for Sunday.

At this point, even with a lack of value, the “over” is the smart bet. Last year, nine songs marked The Weeknd’s halftime show. The eight-song mark has fallen regularly the past few years. Jennifer Lopez and Shakira knocked out 15 songs in 2020. In 2019, Maroon 5 and their guests put out nine songs and added a taped track. Justin Timberlake made it to 11 in 2018. Lady Gaga only played seven in 2017, but three pre-recorded tracks played while she was coming on stage. Would those count? It depends on your book.

Over the last 11 Super Bowl halftime shows, the average number of songs is 8.9, not including pre-recorded tracks. The NFL has decided that this year’s halftime show can last two more minutes than the usual duration, so that provides room for another song. There are five performers, each of whom could carry his or her own halftime show. Each is likely to get a solo track, and three of them should get at least one more, so it would take just one more song to hit the over.

Which song will be played first during the halftime festivities?

Which artist will perform first during the halftime festivities?

Dr. Dre appears as the “headliner” in the presentation of the show, which is why he is listed as the favorite. “California Love” is a huge hit for him, and given the locale of the Super Bowl, it is a natural first choice. “Nuthin’ But a G Thang” was Dr. Dre’s first major solo hit, so that might make sense as the opener. Snoop Dogg is the first rapper on each song, even though they appear on Dr. Dre’s albums. So this could lead to some lucrative parlay payoffs. You might want to put money down on both artists if you like Dr. Dre to show up first in some way.

What if the show is set up like a traditional arena concert, though, with the headliner coming last? That would mean Kendrick Lamar or Mary J Blige going first, with songs such as “HUMBLE” and “Family Affair” the more likely openers. I like Mary J Blige as a dark horse to open here, given the “family” nature of the event.

Which song will Eminem perform first?

The field (any other song) and “Lose Yourself” seem like the top two choices here. “Lose Yourself” seems like an automatic song for him to perform – but it might not be the first one he does. The field gives you some extra value. He might do a medley leading into “Lose Yourself,” and as long as the medley starts with a song not on this list at all, that could make you some money.