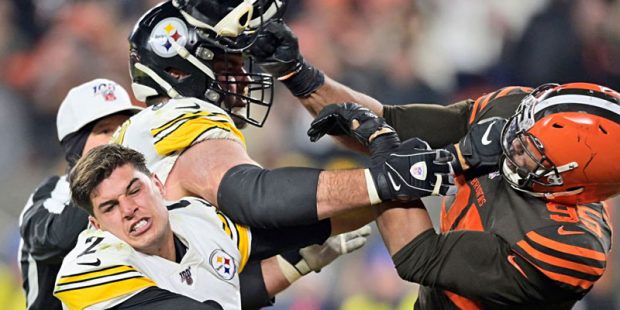 The Cleveland Browns led the New York Jets, 30-17, with 1:31 remaining on Sunday. Teams who were trailing by at least 13 points in the last two minutes had lost 2,331 games in a row. Nick Chubb scored a touchdown to put the Browns up by 13, a move that he would later blame himself for. Why? If he had simply taken a knee, the Browns (up 24-17 at the time) would have just had to kneel the ball three times, as the Jets were out of timeouts. However, the score gave the ball back to the Jets, and Joe Flacco threw a 66-yard touchdown pass to Corey Davis. The Jets then recovered an onside kick, and Flacco found Garrett Wilson for a 15-yard score. Pittsburgh regressed from their Week 1 win over Cincinnati by losing at home to New England, so these two 1-1 teams square off on Thursday night. Who will win? Check out our NFL betting prediction.

Why should you bet on the Steelers?

The Steelers basically had no business winning their opener. Joe Burrow spent the first half throwing the ball to the Pittsburgh defense, piling up four interceptions. However, the Bengals came back to score a touchdown at the end of regulation; had the Bengals had their long snapper, the extra point would have salted away the game. However, using an emergency snapper meant overtime, and the Steelers would eventually score the winning field goal. In the loss to New England, the offense had to rely on its own momentum instead of turnovers, and the result was a 17-14 loss.

Najee Harris was an impressive back in 2021, his rookie campaign. However, he only picked up 49 yards on 15 attempts on Sunday, and Mitch Trubisky only threw for 168 yards with a pick to go along with his touchdown. If you like Pittsburgh, you see them taking advantage of a Cleveland defense that allowed last-minute comebacks to such middling quarterbacks as Baker Mayfield and Joe Flacco, but I’m not sure Pittsburgh has the personnel on offense to match either the Panthers or the Jets – at least not right now.

Why should you put your money on the Browns?

The running game is difficult for anyone to stop. Nick Chubb rumbled for three touchdowns in Week 2, and he and Kareem Hunt have been running roughshod over the opposition so far. The problem for Cleveland comes on defense, ironically enough, after the Browns have given up such huge rallies in each of their first two weeks.

On offense, Jacoby Brissett can manage the system without risking too much in the turnover department. The downside is that he will not generate many exciting plays, but as long as the team’s rhythm keeps going, the Browns should be able to churn out points. I don’t see Trubisky and Harris threatening the Cleveland defense that much, especially in a short week on the road.

This has been one of the more interesting AFC rivalries in recent years, as the brief rise of Baker Mayfield served to overturn Ben Roethlisberger’s hold on the North. However, Mayfield flamed out and headed to Carolina, and Big Ben has retired. While the Browns wait for Deshaun Watson to serve out his suspension and join the team, Jacoby Brissett has the job of leading the team and hopefully keeping the Browns in playoff contention. I see Cleveland coming up with more offensive chances, and I also think the Steelers will struggle to take advantage of the Browns’ defensive miscues. I predict a final score of Cleveland 23, Pittsburgh 17.