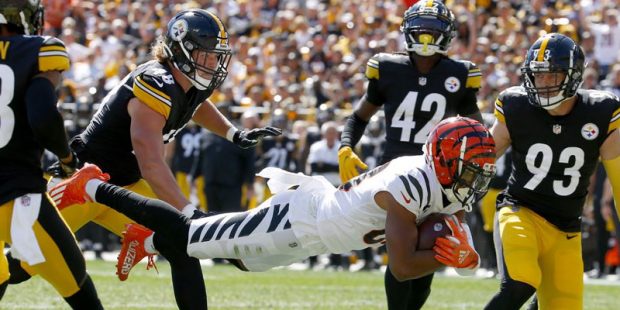 The Cincinnati Bengals have played the Pittsburgh Steelers 105 times since 1970, with the Steelers dominating the rivalry, with 67 wins to just 38 for the Bengals. In the playoffs, the teams have met just twice, but Pittsburgh won both games, in 2005 and in 2015. The 2015 loss was particularly galling for Bengals fans, because Pittsburgh quarterback Ben Roethlisberger had injured his arm and could barely throw the ball 15 or 20 yards down the field. The Bengals had taken a late lead, but then Roethlisberger heaved a ball down the middle of the field for an incompletion. The Bengals would take over and kneel the ball for an easy win. However, Cincinnati linebacker Vontaze Burfict had drawn a 15-yard penalty for laying out a defenseless receiver, and the Bengals got another 15-yard penalty for unsportsmanlike conduct after arguing the call. Those 30 yards gave the Steelers the ball in field-goal range, and they won on Cincinnati’s home field. The Bengals have another shot at revenge as they come in as sports betting favorites not just to win the game but also the AFC North, while the Steelers look to find their next quarterback after Big Ben’s retirement. Check out our NFL betting analysis of this divisional matchup from Week 1.

Why should you bet on the Steelers?

The 2021 season turned out better than it might have for the Steelers, who parlayed a 9-7-1 record into a wild card playoff berth (thanks in part to the bizarre collapse of the Indianapolis Colts). Mitch Trubisky is the new starting quarterback, but he may not hold the job long as the team looks to develop Kenny Pickett. The team may lean heavily on tailback Najee Harris, who established himself as a top runner in the league as a rookie. The wide receiver group is led by Chase Claypool and Diontae Johnson, with Pat Freiermuth a reliable option at tight end.

On defense, T.J. Watt returns after tying the league record with 22 ½ sacks in 2021, and he and Myles Jack lead the linebackers. Minkah Fitzpatrick is the leader of an elite secondary, and Cameron Heyward keys a solid defensive line. The problems on defense come against the run, and the Bengals bring both Joe Mixon and Samaji Perine, but if you like Pittsburgh here, you see the defense disrupting Joe Burrow’s rhythm running the Cincinnati attack.

Why should you put your money on the Bengals?

The Bengals had a terrific 2021, particularly in the second half of the regular season and the postseason. They posted a 10-7 regular-season record, winning more games than they had in the two prior seasons combined, and they won their first playoff game since 1990 when they beat Las Vegas in the wild card round. They then beat Tennessee for the first road playoff win in franchise history, and they came back in the fourth quarter to beat Kansas City on the road in the AFC Championship. Joe Burrow threw for 4,611 yards and 34 touchdowns against 14 interception, and Joe Mixon ran for 1,205 yards and 13 scores. Ja’Marr Chase and Tee Higgins might be the best 1-2 punch at wide receiver in the league, with Tyler Boyd a sneaky option out of the slot.

On defense, Trey Hendrickson is the keystone of the line, with D.J. Reader, Wyatt Hubert and Sam Hubbard joining the rush. Eli Apple returns to the secondary, but we will see how much he contributes alongside Tre Flowers and Von Bell as Apple nears what for many players would be the age when his skills start to decline.

Pittsburgh has only covered once in their last five games as an underdog on the road, but they have covered in four of their last five AFC North games. Cincinnati has covered in eight straight games – and in five of their last AFC North games. Here, I see both teams struggling to move the ball in the first half before the Bengals pull away after some halftime adjustments. I predict a final score of Cincinnati 27, Pittsburgh 16.