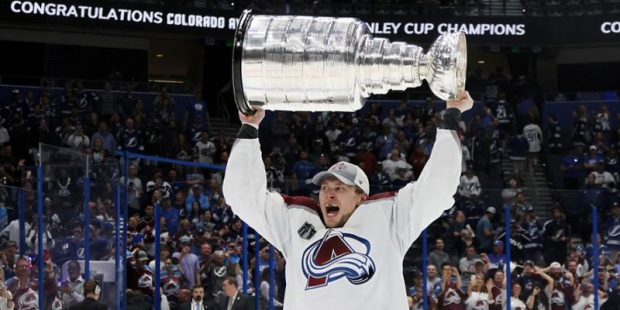 For the first time in 21 years, the Colorado Avalanche are Stanley Cup champions. They eliminated the Tampa Bay Lightning in six games, winning 2-1 on Sunday night to lift the most storied trophy in sport. The Lightning were looking to make it three Cups in three seasons, but the Avalanche turned a 1-0 deficit into a 2-1 lead midway through the second period, and then they locked the Lightning down in the third, permitting only four shots on net. For a core group that includes defenseman Cale Makar, who won the Norris Trophy as Stanley Cup Playoff MVP, Nathan MacKinnon, captain Gabriel Landeskog and Mikko Rantanen, this was a vindication after several early playoff exits. What can we expect next season? Don’t miss the early NHL betting odds for each team to celebrate a championship next year.


Repeating as Stanley Cup champions is difficult. The NHL season is one of the most grueling because of the highly physical nature of the game. Colorado isn’t a bad pick to repeat, but free agency is about to hit hard. Josh Manson, Valeri Nichushkin, Darren Helm, Artturi Lehkonen (who scored the game-winner in Game 6) and Nazem Kadri are all free agent. However, Makar, Rantanen and Landeskog are back next year.

Edmonton is an intriguing, young team in the West. They got swept by Colorado thanks to problems on the blue line and in net. However, they have the two best players in the league in Leon Draisaitl and Connor McDavid, making an excellent core to build around.

Vegas let Pete DeBoer go to get Bruce Cassidy as head coach, immediately getting better behind the bench. (Of course, Dallas went after DeBoer in their latest adventure in snatching up something shiny after another team has gotten rid of it. Ben Bishop was another example of the Stars showing up one team too late. The Stars do have Jake Oettinger, one of the next great goaltenders, but it’s time for Jamie Benn and Tyler Seguin to put up or shut up. They’re overpaid and underproduce, year after year.) Vegas has a roster that can win a Cup, as most of their players were on that inaugural team that went to the Cup Finals. The Golden Knights need an elite goalie; will it be Robin Lehner or someone else?

Tampa Bay made it to a Cup Final despite missing Brayden Point for much of the playoffs. The core will return once again, but this is a team that is taking a lot of wear and tear after three extended postseason runs.

Toronto is still a young, exciting team, and they really just got in their own way this time. Will goalie Jack Campbell leave via free agency? That’s the only major question they face in the off-season.

Pittsburgh got betrayed by injuries in net, or else they would have knocked out the N.Y. Rangers in the East semifinals. Sidney Crosby and Evgeni Malkin return once again, and if Tristan Jarry and Casey DeSmith can stay on the ice, then I like the Pens go further. The Rangers have Vezina Trophy Igor Shesterkin but need more consistency at the blue line.