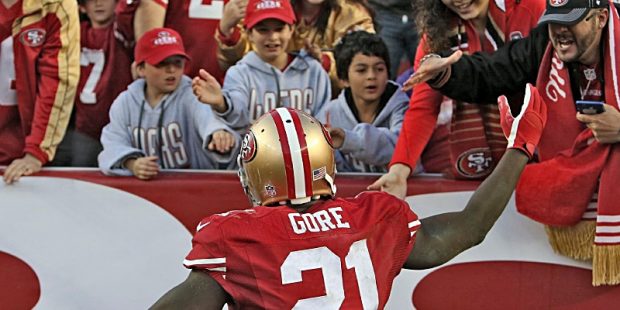 The San Francisco 49ers finished the 2021 season on fire, winning seven of their last nine games in the regular season. That included a sweep of the Los Angeles Rams, an overtime win in Cincinnati – and a bizarre loss in Seattle. They took a wild card slot in Week 17 by coming back to beat the Rams in overtime on the road, and then they took advantage of a lack of football IQ in Dallas to win in the wild-card round of the playoffs. Special teams and defense led to a win in snowy Green Bay in the divisional round, and a dropped interception in the fourth quarter opened the door for the Rams to come back and knock out the 49ers in the NFC Championship. This put the 49ers in the unusual position of moving on from a quarterback (Jimmy Garoppolo) who led them to a conference championship, as the team looks ready to move to Trey Lance – but Garoppolo remains on the roster, as does Deebo Samuel, the wide receiver who also carries the ball out of the backfield – but who wants a trade. What will 2022 look like? We have NFL betting picks for each game.

Elijah Mitchell has a shot at the rushing title if he can get 200-250 carries this season. But can Trey Lance carry the passing game enough to keep teams from loading the box? With Nick Bosa harassing Justin Fields, the defense and running game should be enough for a win. 1-0.

The 49ers’ defense should be able to hem in Drew Lock long enough to grind out the win, particularly at home. 2-0.

Russell Wilson knows the 49ers well, but this time around he has a solid O-line, a decent running game, and an elite defense around him. 2-1.

The Rams are ready to end the 49ers’ ownership of them in the regular season, and they have the talent to break through and do it. 2-2.

The 49ers get to work out some of their frustrations from a two-game skid on the road. Baker Mayfield makes the Panthers more interesting, but he won’t do much with Nick Bosa chasing him. 3-2.

Two Eastern time zone starts in a row? No problem. Atlanta is another team in rebuilding mode, and while Marcus Mariota is a mobile quarterback, he won’t do enough damage to get the win. 4-2.

This is an interesting matchup with two mobile quarterbacks, and the 49ers’ pass rush will give Patrick Mahomes fits. However, the Chiefs should be able to pull this out late. 4-3.

Can the 49ers earn a season split against the Rams? I’m just not sold on Trey Lance leading scoring drives against this defense. 4-4.

This will be a tough day for the 49ers; the Chargers also have a stout pass rush and a solid defense overall, and Justin Herbert is farther along the learning curve than Trey Lance. 4-5.

The Cardinals should be in their late-season swoon by now, and the 49ers’ defense should be able to turn the tables on Kyler Murray. 5-5.

This should be a case of defense and the running game carrying the 49ers to a tough win against another mid-level NFC team. 6-5.

Tua Tagovailoa vs Trey Lance? This is one rare week when I think Lance comes in as the better quarterback. 7-5.

This feels like a trap game as the 49ers sense the playoffs slipping away. 7-7.

The 49ers’ pass rush should be able to frustrate Carson Wentz all day long. 8-7.

Derek Carr will be chasing a playoff spot, and he can throw well on the run. Playing in front of raucous Raiders fans won’t help the 49ers’ chances. 8-8.

The 49ers end their season on a high note by beating an even less consistent team. 9-8.