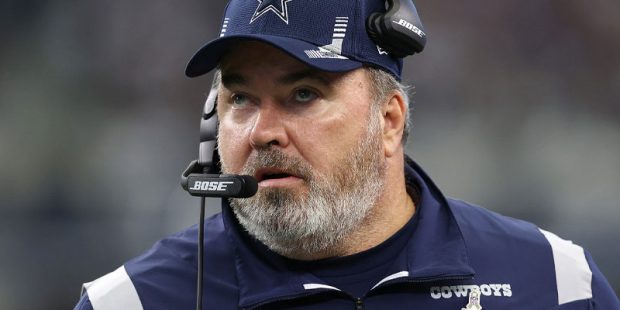 The most optimistic owner in the NFL gave his annual preseason press conference, and the heat is on in Dallas under the seat of coach Mike McCarthy. McCarthy enters his third season with the challenge of getting the Cowboys to the playoffs in back-to-back seasons for the first time in 14 years. In fact, the last time the same head coach got the Cowboys to the playoffs in back-to-back seasons came back in 1998-99, when Chan Gailey pulled off the feat. Dallas went 12-5 last year and won the NFC East but lost in the wild-card round at home, falling to the San Francisco 49ers. The team did not make any significant roster additions in the off-season despite trading Amari Cooper to Cleveland, releasing right tackle La’el Collins and seeing pass rusher Randy Gregory sign a five-year extension and then back out to sign the same deal with the Denver Broncos. The team has $20 million in cap space but looks ready to stand pat – so Jones’ optimism about being “viable in the playoffs” seems more than a bit misguided. Read on to find more stories that could influence your NFL betting this fall.

The San Francisco 49ers have definitively established that Trey Lance is the new starting quarterback. Head coach Kyle Shanahan said in a press conference, “We have moved on to Trey. This is Trey’s team.” Of course, the quarterback who led the 49ers to the NFC Championship last year, Jimmy Garoppolo, remains on the roster, as the team looks to trade him. Jimmy G did have shoulder surgery in March and has been cleared to practice, but he will not take the field in training camp. He has passed his physical, and if the team trades or releases him, the 49ers would save $24.2 million in 2022 base salary and would only face $1.4 million in dead money from Garoppolo’s prorated signing bonus. Deebo Samuel requested a trade in April, but the 49ers have not granted that request, instead working to sign Samuel to an extension. Samuel did report for the mandatory minicamp and training camp, but we will se if Samuel will participate in workouts before that extension is done.

The Tampa Bay Buccaneers have added veteran wide receiver Julio Jones on a one-year deal. He joins Mike Evans, Chris Godwin, Tyler Johnson, Breshad Perriman and Scotty Miller in the wide receiver group. Russell Gage, another former Falcon, joins the group as well. Godwin is returning from a torn ACL, and the team is being cautious there. Jones last played with the Tennessee Titans, who had him for one season. The Titans thought Jones was worth trading two draft picks, but he only played in 10 games due to injuries and had career lows with 434 yards, 31 catches and one touchdown. After appearing in just nine games in 2020 with Atlanta, it is worth asking if his health is up to a full season. Jones does lead the NFL in receiving yards since 2014, and he does add more spark to the Bucs’ offense in what is almost certainly the last season for quarterback Tom Brady. The team is adding Kyle Rudolph as insurance at tight end after the second retirement of Rob Gronkowski.

The Arizona Cardinals added some depth to the wide receiver position when they picked up Marquise “Hollywood” Brown from the Baltimore Ravens, but he is already on the active/non-football injury list with a hamstring concern. With DeAndre Hopkins set to miss the first part of the 2022 season, Kyler Murray will be looking for other targets. Murray also made big news when a comment emerged on Tuesday about the fact that he does not spend a lot of time worrying about film study because he can just see what opposing teams are going to do. Murray’s new contract has a provision that he must study film for at least four hours per week. Head coach Kliff Kingsbury said that he was not surprised by the requirement but noted, “My man’s got a quarter-billion dollars [in his extension]. You can only be upset for so long.” The dynamic in Arizona will continue to be interesting to watch.