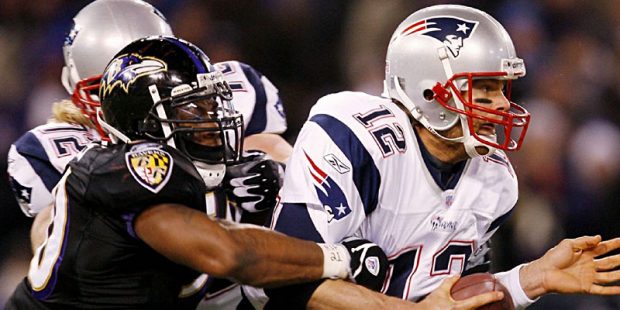 After rolling to an easy win over the New York Jets in their opener, the Baltimore Ravens looked ready to make it 2-0 after dominating the Miami Dolphins as well. After a 79-yard run by Lamar Jackson, the Ravens were up, 35-14, at home. However, Tua Tagovailoa threw four touchdown passes in the fourth quarter, and the Dolphins came all the way back to win, 42-38. Not having an elite wide receiver threat down the field has limited the Ravens’ versatility a bit, but that defensive collapse really has no excuse. Next up is a visit to New England, where the Patriots also come in at 1-1. They lost to that same Miami team by 13 in their opener and then held off Pittsburgh for a 17-14 road victory in Week 2. We have some NFL betting thoughts on this game before you lock in your wagers.

Why should you bet on the Ravens?

Whatever you want to say about Baltimore after the collapse, it’s hard to hang anything on Lamar Jackson. He threw for 318 yards and three touchdowns, and he ran for 119 more yards and had that long touchdown run. The questions come on defense, as the team will need to regroup after giving up those obscene passing numbers. The good news is that the Patriots don’t have a duo of wide receivers like Jaylen Waddle and Tyreek Hill to run wild like Miami did. Nelson Agholor is a nice talent, but he’s not a burner.

Baltimore has covered in four straight games coming after a loss against the spread and has covered in seven of their last ten coming after a straight up loss. John Harbaugh has done a solid job, historically, helping his team bounce back from bad performances. It’s true that the Ravens gave up 547 yards (461 through the air) and 27 first downs to a Miami offense that is still developing, but sometimes bad games snowball like that.

Why should you put your money on the Patriots?

New England is slowly putting together a system around Mac Jones, but the progress is gradual. He threw for 252 yards and a touchdown (and an interception) against Pittsburgh, and the Patriots took a 17-6 lead before holding on tight for a 17-14 win. Jones had 213 yards against Miami in the opener (plus a touchdown and a pick). Again, the numbers are modest, rather than impressive, and I’m not sure that the Patriots can do enough to keep up with Baltimore – or catch up if things get out of hand.

At home, the Patriots have covered the spread in four of their last five. The Pittsburgh team that they beat has a caretaker quarterback in Mitch Trubisky. The Pats were able to pressure Trubisky into settling for a lot of check-down passes, but Jackson is more mobile and should be able to move in the pocket and find better options – or take off on a run. The Ravens should also have J.K. Dobbins back running the ball, which will make their offense even more dangerous.

The Patriots have a more disciplined defense than Miami does, so I don’t see the Ravens pulling out to a huge lead. However, the New England offense is more pedestrian – fewer mistakes, but also fewer big plays. I see this game moving slowly, but I see Baltimore slowly pulling away. I predict a final score of Baltimore 30, New England 20.