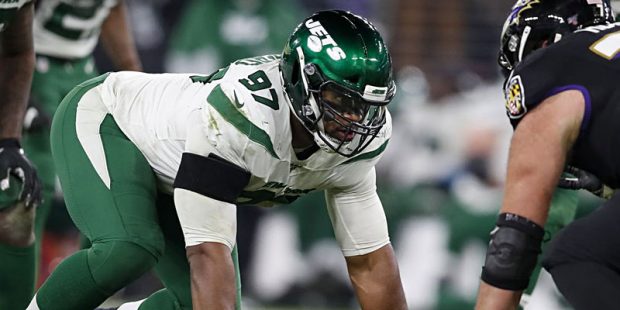 With second-year quarterback Zach Wilson on the shelf for the New York Jets, backup quarterback Joe Flacco will get the start against his longtime former team, the Baltimore Ravens. This might have some intrigue, but Flacco has shown zero mobility for any of the teams he has played for since leaving Baltimore. The Ravens come in after a rough 2021, missing Lamar Jackson for five games and posting an 8-9 record. They will be looking for redemption in 2022 and hope to start the season with a pounding of the Jets. This line started with the Ravens favored by 4 ½ points, but it has drifted upward with the news of Wilson’s injury. Don’t lock in your sports betting on this game without checking out our NFL prediction.

Why should you bet on the Ravens?

The Ravens are due for some better luck in 2022. They started 2021 with an 8-3 record but ost their last six, with five of those losses coming by a total of eight points, and they ended up dead last in the AFC South. They extended their preseason winning streak to 23 games after another perfect slate this year, so we will see if this carries over into the regular season.

Obviously, having Lamar Jackson back is a major plus. He has set a Week 1 deadline for negotiating an extension to his contract, which means that the season itself will not serve as a distraction. Working as his own agent, Jackson is likely trying to get a deal comparable to the one that Deshaun Watson just got in Cleveland, especially given the fact that Jackson has led his team to much greater heights. With J.K. Dobbins back in the backfield, the running game will have more to offer, although trading Hollywood Brown brings some questions ot the passing game. While the Jets have bolstered their defense, though, the Ravens should be able to dictate the rhythm of this game.

Why should you put your money on the Jets?

The Jets improved from 2-14 in 2020 to 4-13 in 2021, but they still came in last in the AFC East and missed the postseason for the 11th year in a row. They did win all three preseason games and even hung 31 points on the Giants in their preseason finale. The Jets did put together a decent group of wide receivers, and if Flacco can get any time in the pocket, he should be able to move the ball up and down the field a bit.

The Jets have only covered once in their last six season openers, and just six times in their last 27 September contests. In their last five games as a home underdog, they have only covered once. If they had their starting quarterback, I might like them to cover as a seven-point underdog because the first week of the season often leads to some chaos on offense as teams figure things out. I just don’t see Flacco leading many sustained drives because of his inability to avoid the pass rush.

I like what Robert Saleh is doing with the culture of the Jets, but the loss of Mekhi Becton means that the O-line starts with a major hole, and I don’t see the Jets being able to hold off the Ravens’ pass rush or open up much in the running game. I predict a final score of Baltimore 30, New York 16.