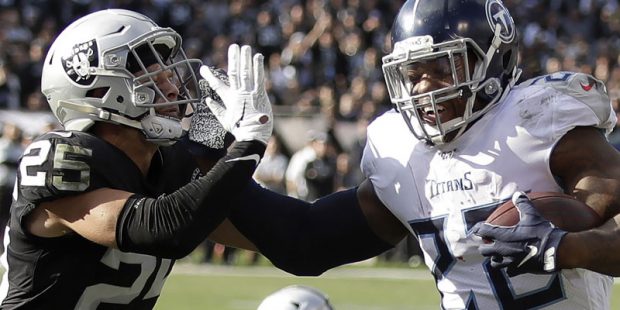 The Las Vegas Raiders have started the season with a pair of hard-luck losses, as their comeback bid failed against the Chargers in Week 1, and then they had an epic collapse in Week 2, watching a 20-0 halftime lead turn into a 29-23 overtime loss at home against Arizona. This week, they head to Tennessee to take on a Titans team that is facing similar frustrations. The Titans saw a game-winning field goal go wide in Week 1 as they lost to the Giants by a single point, and then they went to Buffalo and got dismantled, 41-7, on Monday Night Football. Which team will continue its misery, and which team will get back on a winning path? Don’t miss our NFL betting prediction.

Why should you bet on the Raiders?

Derek Carr has put up solid numbers so far this season, with 547 passing yards and four touchdown passes, but he also has three interceptions. Josh Jacobs is the top rusher for the Raiders, but he has only picked up 126 yards. Davante Adams has been everything the Raiders expected so far, with a dozen catches for 153 yards and two touchdowns, and tight end Darren Waller also has 129 receiving yards.

The Raiders have only covered once in their last five road games and just once in their last eight games against teams with sub-.500 records – a sign of their tendency to play down to the level of the opposition. The lack of effort that the Raiders showed on both sides of the ball in the second half and overtime against the Cardinals was troubling, and it will be interesting to see if new head coach Josh McDaniels can meet the challenge of motivating his team so early in his tenure.

Why should you put your money on the Titans?

Malik Willis came on in the second half when Ryan Tannehill couldn’t move the ball, as Tannehill has struggled this season with a 58.5% pass completion percentage. He also has a pair of picks to go along with two touchdown passes, and he has only thrown for 383 yards. Willis couldn’t do much better against a stout Buffalo defense, but the Titans need more out of Tannehill if they are going to have sustained drives. Tailback Derrick Henry is back, but he only has 107 yards on two games, and it remains to be seen if he can revert to his punishing form.

Trading A.J. Brown to Philadelphia seems to have impacted the production of the Tennessee passing game. Rookie Treylon Burks leads the team with 102 receiving yards, and Dontrell Hilliard has caught a pair of touchdown passes, but the team needs more production. The pass rush has been serviceable, with Jeffery Simmons and Rashad Weaver tallying two sacks apiece so far. The Titans have covered in four of their last five games coming after a loss (with the last failure to cover, of course, coming last week). However, they have not covered in four games in a row. I like Mike Vrabel to get his team back up and ready for this game, given his experience – and the success he has had with the Titans.

Having an 0-2 Las Vegas team as a road favorite here shows a lack of balance – even though Tennessee did get routed by the Bills, we’ve seen that Buffalo is playing at an all-world level right now through two games. The Raiders’ collapse has to be worrisome for Las Vegas fans, but sports bettors should be wondering if Josh McDaniels has already lost the room. I predict a final score of Tennessee 27, Las Vegas 20.