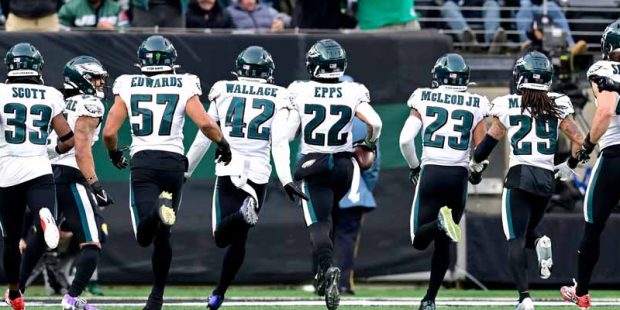 The Philadelphia Eagles come into 2022 looking to capitalize on a winning record in 2021, when Nick Sirianni was a first-year head coach and Jalen Hurts was a full-time starting quarterback for the first time. The Eagles snagged a wild card berth in the playoffs and, while they lost in the first round, there is optimism under Benjamin Franklin’s statue for the coming season. In the off-season, the Eagles traded for wide receiver A.J. Brown from Tennessee to create an elite pairing with DeVonta Smith. Dallas Goedert is one of the best tight ends in the NFL, and Quez Watkins is a young receiver with a high upside. On defense, Philadelphia upgraded its pass rush with the free-agent signing of Haason Reddick and with the drafting of Nakobe Dean and Jordan Davis.

Can the Eagles take the NFC East? Read on to find our NFL betting pick for each game.

It’s a soft contest to open the season, as the Lions continue their neverending rebuild. The Eagles should be able to harass Jared Goff all game long, and the Lions’ defense will have a hard time getting off the field. 1-0.

Minnesota will have Dalvin Cook back and healthy, and wide receiver Justin Jefferson is just the latest Viking wideout to cause terror for opposing secondaries. The problem for the Vikings last year was the defense, but the team has a new head coach in Kevin O’Connell and a new defensive captain in Patrick Peterson. 1-1.

Philadelphia will see former quarterback Carson Wentz in this NFC East game, and I think the Eagles’ pass rush can force Wentz into enough mistakes to turn this into a road win. 2-1.

Former Eagles head coach Doug Pederson will get cascaded with boos at the Linc when he shows up coaching the Jacksonville Jaguars. Can Pederson build the confidence of Trevor Lawrence? I don’t see the Jags sneaking away with a road upset here. 3-1.

Jalen Hurts vs Kyler Murray makes for an intriguing matchup, and with the Cardinals losing DeAndre Hopkins, I see Arizona regressing this season. 4-1.

Dallas’ defense lost a number of key players after a stellar season as a unit in 2021. Their offense lost Amari Cooper. Philadelphia made a number of upgrades. Ready for a prime-time win? 5-1.

The Steelers will still have a solid defense this season, but we don’t know if Mitch Trubisky can lead the offense effectively enough. Coming out of the bye, the Eagles should be ready for him. 6-1.

Going on the road to face a Houston team on a short week? This smells like a trap game. Davis Mills did grow a little bit as a quarterback last year, and I see the Eagles taking things too easy until it’s too late. 6-2.

Carson Wentz against the Boo Birds on Monday Night Football? 7-2.

The Colts have an elite running back and an elite defense. As long as Matt Ryan is serviceable at quarterback, the Colts are a dangerous team. 7-3.

Aaron Rodgers will lead the Packers down the field for a game-winning drive to finish this one. 7-4.

The Titans also bring in a strong running game, but their defense is a bit too generous. 8-4.

The Giants usually play the Eagles close, but Philadelphia builds on the momentum of that Tennessee win and shuts down Daniel Jones. 9-4.

As a sports talk host in Dallas said a couple of weeks ago, “The Chicago Bears have been looking for a starting quarterback since 1814.” They’ve gotten rid of the talent around Justin Fields, so this will be an ugly year for them. 10-4.

This is the time of year when Dallas starts folding against quality opponents (check the video of that Arizona game in December last season). 11-4.

The Eagles have clinched the NFC East but can’t get the bye, so they rest starters, and the Giants take a meaningless one. 12-5.