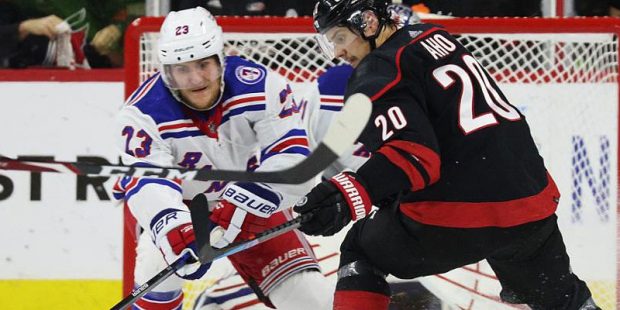 Five teams now remain in the race for the 2022 Stanley Cup. The New York Rangers forced a Game 7 with the Carolina Hurricanes, while the other three conference finalists have all been set. It looks like the oddsmakers believe the Colorado Avalanche and the Tampa Bay Lightning will meet in the Cup Final, but there is a lot of hockey to be played between now and then. Let’s take a look at the updated NHL betting odds for each of the five teams to win the Stanley Cup along with thoughts about each team’s chances.


Let’s start with the two teams at the bottom: Carolina and New York. The Hurricanes have yet to win a road game in these playoffs, and that continued in Game 6, as the Rangers dominated action in a 5-2 win on Saturday. Hurricanes goalie Antti Raanta gave up two soft goals in the first period and then a third to start the second, and he got pulled. Brady Skjei and Vincent Trocheck lit the lamp for the Hurricanes, but the story of the game was Rangers goalie Igor Shesterkin, who reverted to the elite form he showed in the second half of the regular season, stopping 37 shots and even tallying two assists, becoming just the fifth goalie in the history of the NHL to post two assists in a postseason game.

The other side of this coin, though, is that while Carolina is 0-6 on the road in the playoffs, they are also 7-0 at home. Both teams went to seven games in the first round, as the Rangers came back from a 3-1 deficit to beat Pittsburgh and the Hurricanes swapped home wins with Boston before winning in the finale. The key for New York will be sustained pressure on the power play – they went 2 for 5 in Game 6. Shesterkin needs to bring his “A” game on the road. I think the Hurricanes win this, but if the Rangers can get by Carolina, will they have enough energy to meet Tampa Bay?

Speaking of Tampa Bay, the Lightning have played 267 games over the last three regular season and postseasons – 30 more than anyone else remaining in the East and 19 more than any other hockey team. That’s a quarter-season’s worth of additional wear and tear, and the team’s core is essentially the same. Nikita Kucherov did miss all of 2020-21 before coming back for the postseason, but this team’s durability is nonetheless impressive. If the Lightning can go all the way, they would be the first back-to-back-to-back Cup winners since 1983, when the NEw York Islanders finished a run of four straight Cup wins. It’s hard to ignore the Lightning after they swept the Florida Panthers in four games – even though Florida controlled the puck most of the time. This is an opportunistic team that knows when to counter and has confidence in their goalie.

Colorado rolled over Nashville in four easy games, but it took six for the Avs to eliminate St. Louis, and things could easily have gone either way. Game 6 in St. Louis was tied, 2-2, before Darren Helm scored with 5.6 seconds left in regulation for Colorado on a shot that came from the top of the left face-off circle and was more of a flier than anything else, but it made it through traffic and found the back of the net. The Avs had had a shot at winning in five, taking a 4-3 lead with 2:46 left in deregulation, but then St. Louis tied it with 56 seconds left and won in overtime. The Avalanche need to get back to their dominant ways in offense against Edmonton.

And how about Edmonton? The Oilers only needed five games to knock out Calgary in the West semifinals, winning in overtime on a goal from Connor McDavid. Coach Jay Woodcroft put Zach Hyman on the top line with Leon Draisaitl and Connor McDavid, and the gambit paid off. Now the Oilers are in the conference finals for the first time in 16 years. Draisaitl and McDavid posted a combined 29 points in five games, with 17 coming fro Draisaitl, setting a record for the most points in a series between Calgary and Edmonton. Calgary had built a 2-0 lead before the Oilers came back to tie, and then the teams scored four combined goals in 1:11, the fastest four goals ever in playoff competition. The Oilers will not be able to spot Colorado two-goal leads and hope to win, but we did see terrific offense all series from them, and they are a legitimate contender as well.