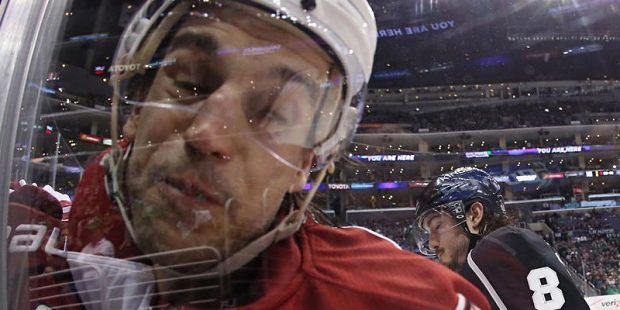 The Florida Panthers have not lost since our last look at the playoff standings, running off a ten-game winning streak that has them leading their division by eight points with nine games remaining, with a game in hand over second-place Toronto. The New York Rangers have also come on strong lately, posting a 7-2-1 record in their last ten games, and now they are just two points out of the Metropolitan Division lead behind Carolina, with a game in hand. The eight playoff spots in the Eastern Conference are all claimed, although teams could still shift in seeding. In the West, only four spots have been claimed. The two wild card teams in the West right now, Dallas and Nashville, have identical 43-28-5 records, four points ahead of Vegas with eight games to play – and with both teams holding a game in hand on the Golden Knights. The more dangerous team right now might be Vancouver, winners of six straight and seven of their last ten – and who just embarrassed Dallas on Monday night, 6-2. Check out the updated standings and our thoughts on which teams should be the focus of your online NHL betting in the postseason.

NHL News: Who’s In the Playoffs?

**-clinched the best record in the conference

If Florida can tally 14 goals between now and the end of the regular season, they would be the first team in 26 years to average at least four goals a game for a complete season. The questions that this team faces all have to do with goaltending, and it’s been solid for three weeks now. They are right up there with Colorado right now, and if both of these teams can make it to the Stanley Cup finals, this would be one of the best finals in years. However, we’ve seen that top seeds have a hard, hard road to the finals, perhaps harder than in any of the other major North American sports.

Toronto has also had inconsistent goaltending, but they still have established new franchise records for points and wins this season. This is a franchise with a proud past but with a mediocre showing since expansion, but these Maple Leafs look ready to bury those memories of futility.

Is Tampa Bay dangerous? The Lightning are lingering around, although they could not manage a single goal against Dallas’ backup goalie two weekends ago, and this is a Stars team that does not play 60 minutes of consistent defense against anyone. Even so, I would not want to have to face the Lightning in a best-of-seven series when they just might flip the switch back on.

The New York Rangers have been riding goaltender Igor Shesterkin all season long, but now that Alexis Lafreniere is waking up, as we saw in his two-goal game against the Red Wings this past weekend, this is a team that might be approaching the danger factor of those mid-1990s teams with Mark Messier and Mike Vernon.

Edmonton has quietly won eight of ten, thanks in large part to heroics in net from Mike Smith. You need a hot goalie to make a playoff run, and the Oilers have that. Hopefully, he can keep that going.