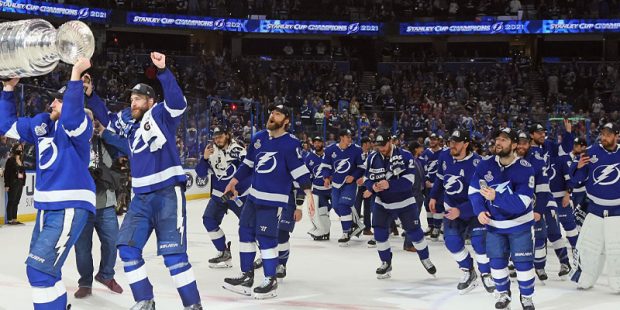 It’s been 29 years since a team won three consecutive Stanley Cups. The last team to pull this feat off was the New York Islanders, who actually won four straight titles, from 1980 until 1983. That team had such greats as Mike Bossy, Bryan Trottier, Al Arbour, Billy Smith, Clari Gillies and Denis Potvin, all of whom are in the Hockey Hall of Fame. Nearly three decades later, the NHL is significantly larger; in 1983, the league had 21 teams, while today’s league has 31, making the probability of a title smaller. The Tampa Bay Lightning have been able to keep a strong offensive corps together, along with an elite goaltender in Andrei Vasilevskiy. However, they opened the Eastern Conference Finals by getting drubbed, 6-2, by the New York Rangers. Can they gut out a third straight title? Check out our thoughts as you consider your NHL betting on the series.

One change this year, compared to the last two seasons, is that the Lightning are accomplishing this run as underdogs. Each season, one NHL team makes a deep run in the playoffs even as the oddsmakers put their numbers against them. In 2020 and 2021, that team was the New York Islanders. Including the play-in round in 2020, the Isles won five series the last two postseasons without being favored to win a single one.

How can the Lightning be underdogs after coming in as back-to-back defending champions? Well, they were not favored against Toronto in the first round, as the Maple Leafs had home ice, and they also had the better season. The Toronto roster has elite talent on offense, defense and in goal. However, the Lightning were able to prevail in seven games.

In the Eastern Conference semifinals, the Lightning were also underdogs against the Florida Panthers, who had the top record in all of hockey for the season and averaged almost 4.2 goals per game. The Lightning were missing Brayden Point, one of their top scorers. However, the Lightning defense absolutely clamped down on the Panthers’ offense, holding them to just three goals in four games. Tampa Bay did take advantage of defensive issues, scoring 13 goals in the four wins. The sweep ended up giving Tampa Bay nine days off before facing the Rangers in the first game of the conference finals, so you could forgive the Lightning for having accumulated a bit of rust during that long layoff.

It is worth noting that Tampa Bay is getting action from sports bettors. Behind Colorado (27%) and Florida (10%), the Lightning are third (7%) in bets placed to win the Stanley Cup. It is worth acknowledging the difficulties that teams face when it comes to repeating as champions. The past few seasons, these difficulties have been even greater. The COVID-19 outbreak forced a lengthy pause in the 2019-20 season, with teams gathering for a play-in tournament and then an entire playoff without fans, and the Lightning were able to knock off the Dallas Stars to win that title. Then came a shortened break (three months instead of four) and the Lightning did it again. This time the playoffs will be over in June, so if the Lightning hoist the Cup, this will make three titles in 33 months – a lot of mileage on the legs with three fewer months of recovery time along the way.

One additional obstacle for Tampa Bay is New York goaltender Igor Shesterkin. The Rangers’ netminder had serviceable play in the first round and most of the second, but he picked things up down the stretch against Carolina in the second round, getting back to elite form. He turned aside a barrage of Tampa Bay shots in the Eastern Conference Finals opener, and the Lightning will have to solve him to get to the Cup Final. However, as they have shown time and time again the past three seasons, they have a way of getting past obstacles.