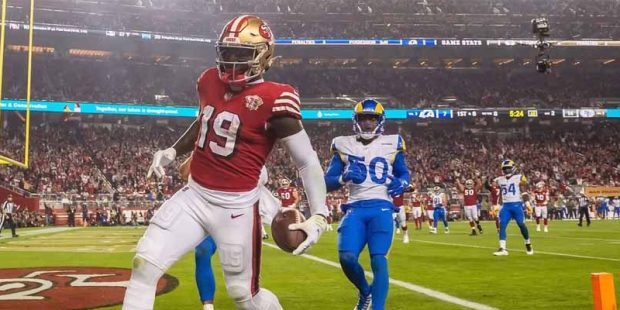 It wouldn’t be the 2020s if we didn’t have memes to follow up big NFL playoff games, and some have trolled Green Bay quarterback Aaron Rodgers. In one, the caption says that Jimmy Garoppolo has replaced Dr. Anthony Fauci as his least favorite Italian, a dig at the controversies that Rodgers has faced over his stance on COVID-19 vaccination. Another has Rodgers on a fake Doritos bag, with the flavor as “NACHO YEAR.” The Packers lost to San Francisco in a game in which the 49ers did not score an offensive touchdown, just the ninth time that had happened in NFL history. What can we expect out of the conference championships? We have your NFL betting picks against the spread right here.

Sunday, January 30 | 3:00 pm ET, CBS
If you watched the Bengals beat the Tennessee Titans last week to get their first road playoff win in franchise history, then you saw a passing game basically overcome poor protection and a limited running game do just enough to get the win. It also helped that Ryan Tannehill threw three interceptions – a situation not likely to repeat itself in Kansas City. If you watched the Chiefs beat the Bills, you saw a Chiefs team that doesn’t have much in the way of pass defense but was able to use its own offensive prowess (and luck at the overtime coin flip) to generate a win. It also helped that Buffalo went into a ridiculous prevent defense that let Kansas City pick up over 40 yards on two plays, in a combined eight seconds, to get the game to overtime in the first place.

You also saw Joe Burrow get sacked nine times…and still lead the Bengals to victory. You also saw Cincinnati blow a 16-6 lead in the fourth quarter, allowing the Titans to tie the game. The Chiefs have a much more dynamic offense than the Titans do, but the Chiefs also give up a lot more on defense, and the Bengals will come in with all kinds of confidence after beating the Chiefs in Week 17 and then winning two tough playoff games. I think Mahomes pulls this game out, but I also think he has to wait until the last possession to do it, which makes the seven-point spread a bit high. Give me Cincinnati to cover.

Sunday, January 30 | 6:30 pm ET, FOX
The Rams have not beaten the 49ers since the 2018-19 regular season, as the 49ers have won six straight in the rivalry. It looked like the Rams would end that streak in Week 18 this year, as they built a 17-0 lead over the 49ers at home. A San Francisco loss would have left them out of the playoffs, but then the 49ers roared back to tie the game at 24 and won in overtime with a field goal. Then came wins at Dallas and Green Bay, and now the 49ers are back to face the Rams again for a shot at the Super Bowl.

The Rams have a fearsome pass rush with Von Miller and Aaron Donald, but the 49ers have found ways to avoid trouble with that unit. They add in a running back for extra protection, and they also use shorter routes and quick dropbacks to get the ball out quickly. They also avoid throwing toward Jalen Ramsey, and so they have not fallen into the same traps that have captured other Ram opponents.

The Rams’ offense is terrific, but they need to do more on the ground to beat San Francisco. They have a great receiving corps that starts with Cooper Kupp and also includes Odell Beckham Jr, with Tyler Higbee at tight end, but with Cam Akers back they need to pound the ball with him and Sony Michel more. That will keep the likes of Nick Bosa and Arik Armistead from teeing off in the passing game.

In Week 18, it looked like the Rams had finally figured out how to deal with the 49ers on both sides of the ball – but then the 49ers started to come back, and the Rams fell apart. The Rams also almost fell apart against Tampa Bay in the fourth quarter. This isn’t a team I like in terms of finishing games, so I’m taking San Francisco to cover.