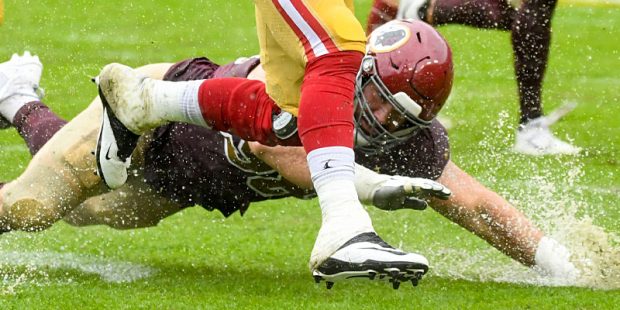 NFL training camps are about to open, which means it’s time to sort out the 32 franchises to understand which teams are actually contenders, which teams could come out of nowhere (like Cincinnati did last year), which teams are destined for mediocrity, and which teams will have unhappy fan bases. Take a look at our thoughts on the levels of the 32 teams as you think about your NFL betting for the coming season.

Green Bay still has Aaron Rodgers, and Randall Cobb and Allen Lazard are his top two targets. Aaron Jones and A.J. Dillon can pound the ball on the ground, and the defense can hold its own, although the secondary is shaky at times. Kansas City brought in JuJu Smith-Schuster and Marquez Valdes-Scantling to run routes after the end of the Tyreek Hill era. The O-line remains top-notch as Orlando Brown Jr returns at left tackle. The secondary could slide as Tyrann Mathieu is gone, and how hungry are the Chiefs, really? Cincinnati is somehow still a dark horse after that explosive run last year. Ja’Marr Chase, Tee Higgins and Tyler Boyd might make the best receiving corps in the league, and Joe Burrow is clutch under center. Joe Mixon returns at running back, and the Bengals added two key pieces on the offensive line. Eli Apple and Chidobe Awuzie will face challenges in the secondary, but the table is set for another terrific season. Tampa Bay joined this top tier when they added Julio Jones on a one-year deal, because I was overwhelmed with Tom Brady just having Mike Evans running routes. Chris Godwin is back but has not shown that he is healthy yet. The O-line remains solid, and Todd Bowles’ defense is still loaded. The Rams still have all of those quality pieces around Matthew Stafford. Odell Beckham Jr, Cooper KUpp and Allen Robinson make a great receiving corps, and Cam Akers has healed in the off-season. The defense should be solid as well, with Aaron Donald and Jalen Ramsey reading the unit, although Troy Hill is back in Hollywood after spending a year in Cleveland. The Chargers get Mike Williams back opposite Keenan Allen. The offensive line almost has too much depth, and the defense added strength at each level. Buffalo has Stefon Diggs, Jamison Crowder and Gabriel Davis running routes, and James Cook can catch balls out of the backfield. Josh Allen’s strength and mobility mean that the flaws int he Bills’ blocking scheme aren’t as much of a problem as they would be for less mobile quarterbacks. The defense has improved on all three levels.

Expectations Include the Divisional Round

Tennessee lost A.J. Brown but added Treylon Burks and Robert Woods, but they are still down in terms of quality options. The O-line has two new starters, and Derrick Henry is healthy and should return at full strength. The problems for Tennessee include the secondary, but this is still a team that could win the AFC South, because there aren’t any other teams in the division that can burn them down the field. Indianapolis, once again, has rolled the dice on a veteran quarterback with a checkered history with an otherwise terrific roster. The defense has the manpower to roll through the division, and Jonathan Taylor can pound the ball on the ground. Can Matt Ryan guide the offense more effectively than he did it in Atlanta in the seasons after that Super Bowl meltdown? He doesn’t have any electric wide receivers to help him. Minnesota has an underrated quarterback in Kirk Cousins, especially with talent around him like Justin Jefferson and Dalvin Cook. Za’Darius Smith and Jordan Hicks bring in new veteran leadership at linebacker for a defense that suffered last season. The Raiders lured Davante Adams from Green Bay, giving Derek Carr a top target, and Josh Jacobs can pound the ball on the ground. However, the O-line is a bit questionable, and except for the front four, the defense can be porous. Denver has placed a bet on Russell Wilson having a lot left in the tank at quarterback, with Courtland Sutton and Jerry Jeudy running routes. The O-line is solid, and the defense has a lot of good names with something to prove, starting with Randy Gregory. Baltimore decided to sent Hollywood Brown packing, which means the Ravens will have to run the ball, with tailbacks Gus Edwards and J.K. Dobbins supplementing Lamar Jackson. The defense gets Marlon Humphrey and Marcus Peters back from injury, and the youth they have brought in on all three levels should make them better. Philadelphia added A.J. Brown to run routes opposite DeVonta Smith. The defense got better at all three levels, especially with the addition of Jordan Davis on the D-line. Dallas lost La’el Collins off the O-line, and left tackle Tyron Smith has durability questions. The offense has chemistry, but leadership is still a problem. The defense has Micah Parsons and Trevon Diggs leading the way, but Diggs makes mistakes almost as often as he snags interceptions. The front four lost out on the Von Miller sweepstakes and saw Randy Gregory leave, and I just don’t see the Cowboys keeping quite up with the other teams on this list.

A Wild Card Would Be a Terrific Season

Washington has a pretty good team about Carson Wentz. He has Terry McLaurin and Antonio Gibson at receiver – both speedy options. The defensive front is terrific, led by Chase Young, but the secondary has questions. And how much does Wentz have left? New England snagged a wild card last year with a rookie quarterback, and this team still gets to play two games against the Jets and the Dolphins every year. The defense is underrated, with Matt Judon a quietly solid edge rusher. New Orleans has Jameis Winston back from an ACL tear, but Alvin Kamara will miss time with a suspension, and Michael Thomas is a huge question mark after missing most of the past two seasons. The defense has solid players but is old. The Jets upgraded their O-line, added a pair of exciting wide receivers and upgraded their defense, but how long will the new additions take to jell? Arizona has a great roster on paper, but that roster has a lot of miles on it: James Conner, A.J. Green and Zach Ertz. Hollywood Brown might be the most exciting addition on offense, but this team will have to score a ton to outscore the opposition. San Francisco is swapping out quarterbacks after going to the NFC Championship and might lose Deebo Samuel as well. The O-line is still solid, but how much will this team be able to move the ball? Pittsburgh will struggle to move the ball, no matter whether Mitch Trubisky, Mason Rudolph or Kenny Pickett is the quarterback. The defense has some questions to answer at quarterback but still has some elite disruptors. Cleveland is another team with an elite roster – but with a major hole at quarterback. The secondary does come back with some injuries, but the running game and the front seven on defense are solid. How long will Deshaun Watson be suspended? That will drive the narrative for the Browns this year. Miami will go so far as Tua Tagovailoa takes them this season. He has elite targets in Tyreek Hill and Jaylen Waddle, and the offensive line is better. The tailback corps might be the best in the AFC East, and the defense has a ton of talent. But I’m not sure Tagovailoa can lead an NFL offense to the playoffs.

In the Premier League, They’d Be in Danger of Relegation

Atlanta basically has its second rebuild in as many years, this type with Marcus Mariota or Desmond Ridder leading the offense instead of the husk of Matt Ryan. Houston is apparently seeing how long it can go as a franchise without elite talent at any of the skill positions. Davis Mills returns at quarterback, and he did show poise in the last third of the 2021 season, but he still doesn’t have a quality offensive line in front of him, and Brandin Cooks is the only decent receiver on the roster. The running back corps is a garage sale led by Marlon Mack and Rex Burkhead. Chicago did bring in a new head coach, and they have two good tailbacks in David Montgomery and Khalil Herbert, but they don’t have a legitimate O-line. The new head coach, Matt Eberflus, is defense-first, so that side of the ball should be better, but getting to 21 points each week will be a stretch. The Giants also have an iffy offensive line, so all the talent (Saquon Barkley, Kenny Golladay and Daniel Jones) won’t have room to maneuver, and Jones’ propensity to turn the ball over is a trend that the Giants simply cannot escape. Detroit has talent at all of the offensive skill positions except quarterback, as Jared Goff certainly seems to be on the downhill side of his career. The defense added Aidan Hutchinson to bolster the pass rush, but the rest of that side of the ball is still too porous. Jacksonville has Trevor Lawrence throwing the ball to Christian Kirk and Zay Jones, and Brandon Scherff will improve the offensive line, but there is still plenty of building to do. The main problem for the Jaguars remains ownership and franchise management, and those people aren’t going anywhere. Seattle still has D.K. Metcalf, Tyler Lockett and Noah Fant catching passes, but the offensive line won’t be good enough to protect Geno Smith or Drew Lock. The defense is fine in the middle, but on the edges and in the back, this team will give up way too much. Carolina has drawn some attention by getting Baker Mayfield, but if Christian McCaffrey can’t bounce back to his former self, the team will struggle. The defense will surprise some teams, but that offense is a huge question mark.