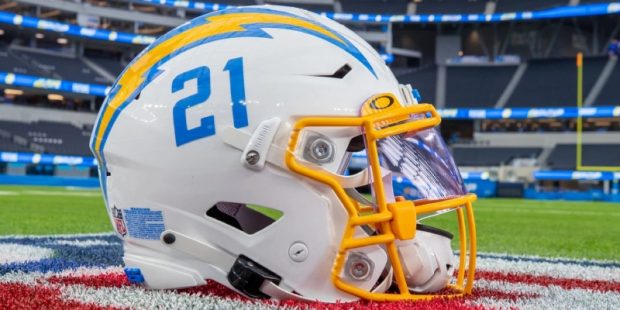 Did you know that 2022 will be the first season the Los Angeles Chargers have ever hosted the Raiders in a season opener? The two teams have shared divisions for years, but somehow this schedule permutation had never happened before. This will be a rematch of Week 18 last year, one of the most exciting games of the whole season. The Chargers fell in a 35-32 overtime thriller. Will they get revenge in Week 1? Will they beat the NFL betting win total of 10? Read on to find our game-by-game predictions.

When the Chargers played that odd season in Carson, they didn’t have much of a fan base. But the L.A. fans showed up last year, and they will this year. The teams split this series last year, and the Raiders have a spotty O-line and a secondary. 1-0.

Kansas City drafted well but did themselves no favors in free agency. Patrick Mahomes is always dangerous, but I see a downturn for the Chiefs this year, while the Chargers have a better O-line and a tougher defense. 2-0.

Will Doug Pedersen be better at head coach than Urban Meyer? Based on his time in Philadelphia, Pedersen should be able to get his teams deep into the postseason, but we shall see. 3-0.

The Texans dealt the Chargers a hideous loss last season that ensured the Chargers would miss the playoffs. It is time for revenge, and the Chargers have improved on both sides of the bal. 4-0.

Browns games are a tough call this year. Will Deshaun Watson be suspended? If he is, he should have a ton of elite targets to catch the ball, with Amari Cooper coming from Dallas. If he isn’t, can Jacoby Brissett drive the bus well enough for the Browns? Cleveland has a stout defense, and this is a wacky game I see the Chargers losing. 4-1.

Russell Wilson vs Justin Herbert in prime time? This will be must-watch football. Herbert is an elite quarterback, and I like him leading a late drive in the fourth quarter to win a squeaker. 5-1.

Whether it’s Drew Lock, Jimmy G or Baker Mayfield starting at quarterback, Seattle will not be good this year. The defense gives up way too many last-minute plays, the running game cannot produce consistently. 6-1.

The Falcons are in the middle of a rebuild. Hopefully Desmond Ridder emerges eventually as the next franchise quarterback, but he hasn’t arrived yet. 7-1.

The inevitable trap game comes. San Francisco has an adequate defense and a stellar pass rush. We don’t know how happy Deebo Samuel is, and Jimmy G is still on the roster. Even so, I like the 49ers here. 7-2.

The Chiefs get revenge for that home loss by going to L.A. and delivering a big win behind a big game from Mahomes. 7-3.

The Chargers will head to Arizona with a purpose, and they will catch the Cards on a week when they have shown a tendency to start swooning. 8-3.

The Raiders earn the season split as Derek Carr has a huge night through the air. 8-4.

Miami has a new coach – but Tua Tagovailoa is still an unknown quantity at quarterback. If this game were on the road, I’d be worried, but it’s the Dolphins who have to travel west. 9-4.

The Chargers are installing a new run defense this year. All the kinks will be out by the time Derrick Henry comes to town. 10-4.

Another run-heavy offense arrives with Jonathan Taylor. The Chargers will pressure Matt Ryan, who will make mistakes. 11-4.

The Chargers play their fellow SoFi tenants. If the Rams need this win to salt away the division or a bye, then they should be able to break down the Chargers’ pass defense. 11-5.

This game could be for the AFC West, or it could be for playoff elimination for either team. Playing in the cold on the road could be a tall order, and I see the Broncos coming out on top. 11-6.