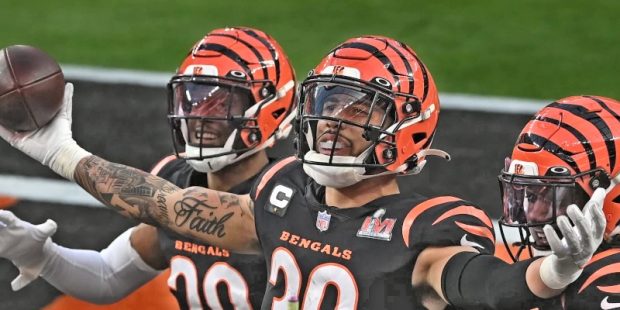 The Cincinnati Bengals are now the heroes of the Queen City after their stunning run to Super Bowl LVI last year. However, if we turn back the clock a little further, things looked bleak for the Bengals for much of the season. Yes, they started with a 3-1 record, but they went into the bye with a 5-4 mark, having dropped a road game to the hopeless New York Jets and then having come home to get throttled by Cleveland, 41-16, in basically the Browns’ only emphatic offensive performance of the season. After that, though, the Bengals went 5-3 the rest of the way, including a meaningless loss in Cleveland after they had already salted away the NFC North title thanks to a comeback win over Kansas City in Week 17. Currently, on the online NFL betting, the Bengals have a win total at or around 10, with the moneyline moving toward the “under.” Does this make sense? Let’s take a closer look.

In the off-season, the Bengals made much-needed additions to their offensive line through free agency, and their draft earned a grade of B+ from Pro Football Focus. In 2021, Joe Burrow led the Bengals to a Super Bowl despite taking 70 sacks (including the playoffs, and including a devastating series of sacks in the last minutes of the Super Bowl). Instead of bringing in just one big star for a unit of five, they added guard Alex Cappa, center Ted Karra and tackle La’el Collins, all solid Tier 2 talents. With the O-line upgraded, the team could pick such solid players in the draft as Daxton Hill, a defensive back from Michigan. Because of their solid off-season moves, the Bengals remain a contender, not just in the AFC North but in the entire NFL.

Joe Burrow vs Mason Rudolph? Please. Yes, the Steelers have an elite defense, but the Bengals were able to pick up points against top defenses a year ago, and if they could stop Patrick Mahomes twice in January, then can stop Rudolph. 1-0.

Dallas had a stellar defense in 2021, but they lost a lot of their key contributors to free agency and, as is typical under Jerry Jones ownership, did a lot more talking than upgrading. So Burrow should be able to find receivers down the field. 2-0.

The Jets will be much better this season, but while they beat the Bengals a year ago, Cincinnati will be ready this time. 3-0.

Miami has to travel on a short week with a quarterback who is still building his confidence at the pro level. 4-0.

The Ravens should have this date highlighted on the calendar already, and their defense will get after Burrow. Can the Bengals slow down the Ravens again? I’m not so sure they can get this done on the road. 4-1.

By this time, the Saints should have Michael Thomas and Jameis Winston in sync, and the Saints will be more dangerous on offense than they were a year ago. 4-2.

The Bengals bounce back from a two-game skid by harassing Marcus Mariota and throwing the ball all day long. 5-2.

Think the NFL wants to redo this week’s schedule? It’s likely that Deshaun Watson is still suspended, leaving Jacoby Brissett to lead the Browns against Cincinnati. 6-2.

The Panthers’ rebuilding project will be another half-season along, but they’re not ready to stop the Bengals. 7-2.

A chance to beat the Steelers on the road in prime time? 8-2.

The Titans should be back to their smashmouth, pound-the-ball selves, and I’m not sure the Bengals have the defense to stand up to them. 8-3.

The Browns will still be in turmoil, while the Bengals will be focusing on the postseason. 9-4.

Joe Burrow goes to Tampa and steals a win from under the nose of a slightly distracted Tom Brady (who moves on to a nine-figure broadcasting contract next year). 10-4.

It’s Christmas Eve in Foxboro, but I’m not sure even Bill Belichick has the defensive legerdemain to stop Joe Burrow & Co. 11-4.

The Bills and Bengals will both be rounding into playoff form here. The Bills did even more to improve themselves in the off-season than the Bengals did. 11-5.

I think the Bengals end up needing this to clinch the AFC North, with the Ravens hot on their heels. 12-5. Take the over.