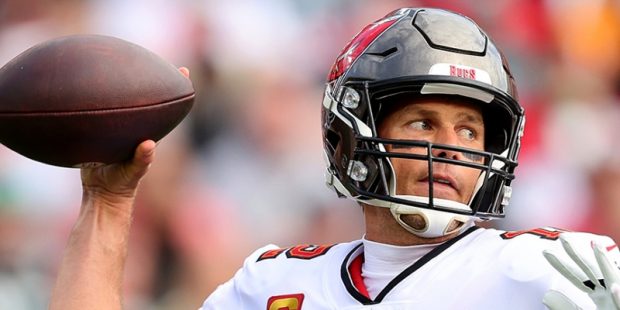 Tom Brady has already accomplished more in his professional career than a lot of entire NFL rosters. He has seven Super Bowl rings spanning over twenty seasons, starting with Super Bowl XXXVI and ending with Super Bowl LV. He has five Super Bowl MVP trophies and three NFL MVP awards. He had to miss a season with a broken collarbone but returned to take NFL Comeback Player of the Year in 2009. He is on the All-Decade Teams for the 2000s and the 2010s and is on the NFL’s 100th Anniversary All-Time Team. He holds the NFL records for wins by a quarterback (243), as well as career passing yards, attempts, completions and touchdowns. He’s not slowing down, either, as he set a new league record for pass completions in a season (485) this past year with the Tampa Bay Buccaneers. Can he lead his team to one more title before what looks like a second career in the broadcast booth? Read on to find out if you should include Brady and the Bucs in your NFL betting for this year’s Super Bowl title.

NFL News: Can Tom Brady Get One More Ring?

The NFC is the easier side of the bracket

There were years when it was the New England Patriots and everyone else in the AFC, which made it easier for Brady to get to the league’s title game than it might have been in the NFC. Now, though, the tables have turned. In the AFC, any of the teams in the West could get to the Super Bowl. The Buffalo Bills, the Indianapolis Colts, the Tennessee Titans, the Cincinnati Bengals and the Baltimore Ravens could all advance as well. Those nine teams all have solid to elite quarterbacks, imposing defenses and solid running games.

In the NFC, it’s Tampa Bay, the Rams, and everyone else. There are some other talented teams in the NFC, but every team has a flaw that would be exposed earlier in the playoffs. The San Francisco 49ers are trying to build around Trey Lance. The Arizona Cardinals don’t trust their quarterback to prepare for games. The Dallas Cowboys don’t have the football intellect to manage games, and their elite defense from last year was weakened by free agency. The Green Bay Packers still have Aaron Rodgers, but they don’t have an elite wide receiver anymore.

Brady is still at the top of his game

In addition to that record for completions in a season, he led the NFL in passing touchdowns (43) and yards (5,316). Offensive coordinator Byron Leftwich returns, but with new head coach Todd Bowles, it looks like the Bucs will run the ball more. Brady also led the NFL with 719 pass attempts, and he would like that number to go down. Leonard Fournette, Giovani Bernard and Ke’Shawn Vaughn are all on board in the running game, and Rachaad White, drafted out of Arizona State, looks to be the receiving back that Brady has not had since the days of James White in New England. Mike Evans, Julio Jones and Russell Gage are the top three wide receivers until Chris Godwin returns from rehabbing his ACL. Rob Gronkowski is gone at tight end, but Kyle Rudolph will be the pass-catching tight end, while Cade Otton will carry the blocking duties.

The defense will be better

The Buccaneers came back from a 27-3 deficit against the Rams in last year’s NFC divisional playoff, only to watch Cooper Kupp get loose down the field for a game-winning field goal. Tampa Bay permitted 445 completions last year, a league high, thanks in part to a dominant run defense, which has led the NFL three years in a row. Carlton Davis III returns at shutdown corner after missing seven games last year. A healthy season from Davis should even out the pass defense. Keanu Neal and Logan Ryan have arrived as free-agent safeties, and Sean Murphy-Bunting and Jamel Dean round out the cornerback group. They sent Jason Pierre-Paul and Ndamukong Suh off in the off-season, bringing in Joe Tryon-Shoyinka as the get younger in the pass rush.

So can Tom Brady win a Super Bowl? The talent is similar to what he had when the Bucs won two years ago, and in a diluted NFC, Brady can definitely make one more run to the top.