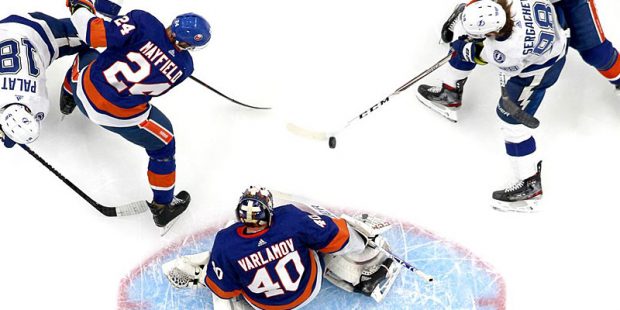 Midway through the second period of Game 3, it looked like the New York Rangers were well on their way to pushing the Tampa Bay Lightning to the brink of elimination. The Rangers had won Games 1 and 2 at Madison Square Garden and had just taken a 2-0 lead, as Mika Zibanejad and Chris Kreider scored power-play goals just 2:07 apart. Then the Lightning woke up, and Nikita Kucherov got a power-play tally of his own to halve the deficit. Steven Stamkos brought the Lightning level just 1:22 into the third period. The defenses stiffened, and the game looked like it was headed to overtime, but then Ondrej Palat lit the lamp with 42 seconds remaining in regulation to give the Lightning a huge comeback. How will the Rangers respond in Game 4? Don’t miss our NHL Stanley Cup betting preview.

Why should you bet on the Rangers?

Igor Shesterkin was the hero once again for the Rangers, even though he could not stop the barrage of power-play chances. The Rangers took some silly penalties that opened the door for the Lightning to get back in, and the Rangers will not be able to afford those kinds of mistakes again. Shesterkin drew the two penalties in the second period that led to New York goals, and he had 48 saves on the night.

If the Rangers had taken advantage of a four-minute power play with nine minutes left in the third period, instead of taking a penalty of their own seconds later, then things might have turned out differently. The Rangers had won all five meetings with Tampa Bay going into Sunday, but they are only 2-6 in playoff road games. Of course, that last road win had come in Game 7 against Carolina. If you like the Rangers, you see their defense getting back to disrupting the Tampa Bay puck movement and using their own offense to control the game.

Why should you put your money on the Lightning?

If you like the Lightning, you see what happened midway through Game 3 as an awakening for the team. With both teams at full strength, the Lightning have more than held their own in this series; it is when the Lightning have taken penalties that things have gotten out of hand. This is a team with plenty of postseason savvy and experience, so while other teams might have panicked after going down 2-0, the Lightning simply went to work.

It also helped that Andrei Vasilevskiy brought a higher level of play. Shesterkin had clearly been the better goaltender in Games 1 and 2, but Vasilevskiy stopped 28 of 30 New York shots and found a new level after the Lightning came back to make it 2-1. Tampa Bay posted a huge comeback to beat Toronto in the first round, only to steamroll Florida in the second round. If we were just dealing with a Lightning team shaking off nine days of rust, the team seems to be back in business.

It will be interesting to see how the Rangers respond to the first real blows from Tampa Bay in this series. The Lightning have had their ups and downs this season, and they are not the dominant club that won the last two Cups. They remain dangerous, but I see the Rangers coming back out in Game 4 and setting the tone once again. I like the road upset and a 3-2 Blueshirt win.