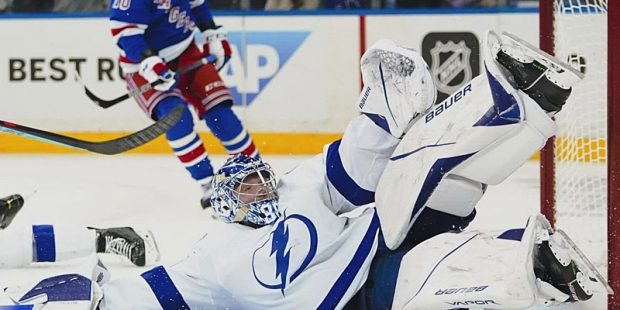 If the New York Rangers end up losing the Eastern Conference Finals to Tampa Bay, the midpoint of Game 3 will haunt them. They had a 2-0 lead in the series and led Game 3 2-0, but then a silly penalty led to a Tampa Bay power play, and the Lightning made it 2-1 before coming all the way back to win, 3-2. The Lightning followed that game up with an emphatic 4-1 win in Game 4, and now the series heads back north tied at two games apiece. Can the Rangers take the initiative back in the series, or will the Lightning roll to another series win? Don’t miss our NHL Stanley Cup betting preview.

Why should you bet on the Rangers?

The Rangers have gotten into trouble in each of their first two series before righting the ship and winning. This happened against Pittsburgh, when the Penguins went up 3-1 before the Rangers reeled off three straight wins to take the series in seven. In the second round, Carolina was up 3-2, and then New York won the last two games. So this team does respond when its back is against the wall. Remember that the Lightning have only beaten New York twice in seven tries now this season, so it’s unlikely that the Rangers will not get off the mat.

The Rangers also have the best goalie in the NHL on their end of the ice. Igor Shesterkin had some streaky patches against Pittsburgh and Carolina, but he also managed to get back to the same elite form that he showed in the second half of the regular season in time for his team to advance. He did stop 48 shots in the Game 3 loss, and so the chance to get more rest and get back onto home ice should rejuvenate him. The Rangers will go as far as Shesterkin takes him, and they need him to stand on his head again in Game 5.

Why should you put your money on the Lightning?

The Lightning have a stout goalie of their own in Andrei Vasilevskiy. The Rangers turned up the heat in Game 4, sending 35 shots at the Tampa Bay net. Vasilevskiy turned aside 34 of them, as the Lightning were able to stymie the Rangers at even strength. The only Blueshirt goal came on a power play int he third period, and while Vasilevskiy had to stop three shots when the Rangers were short-handed, the fact that the Lightning controlled 5-on-5 is a trend that will bring them victory in this series if they can continue.

The Rangers are getting plenty of shots, but they need to drive to the net and get chances that are closer to Vasilevskiy. They got away from that recipe in each of the first two rounds but were able to get back to it in time to win. I see them figuring things out and delivering a 3-2 home victory.