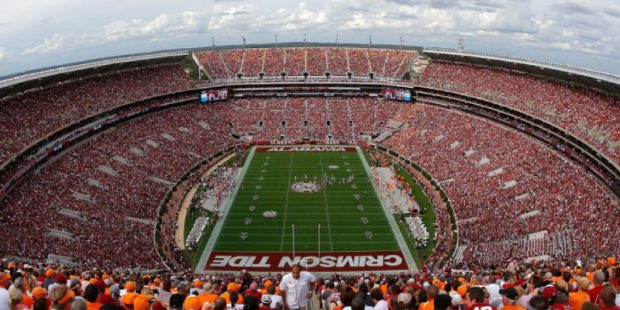 You can say a lot of things about the Alabama Crimson Tide football program, but you cannot say that it is boring. The Tide advanced to the last two College Football Playoff championship games, beating Ohio State in 2021 but losing to Georgia a year ago – a little over a month after beating that same Bulldog team in the SEC Championship. In the off-season, Nick Saban did not like seeing Texas A&M get a higher rating for their recruiting class than Alabama did, so he went to the press and said that Aggies coach Jimbo Fisher “bought the whole team” using NIL deals. That led to an ugly back-and-forth that has quieted but still leaves a bit of a haze over the 2022 season. Let’s look at Alabama’s 2022 schedule as you consider your College Football betting choices.

Both teams will be working out the kinks and getting their nerves out of their systems, but this is definitely not an even match. Expect some solid effort from Utah State, but expect the Crimson Tide to win by at least four touchdowns in their first action since that loss to Georgia.

Texas has some solid talent, but this is a program that believes it is much better than it actually is. Coach Steve Sarkisian is a former Nick Saban assistant, but I don’t expect the Longhorns to keep this one close.

This is another spunky team from a lower conference that will get a big check for coming to Bryant-Denny Stadium. This is also another game where the line will push 30 or 40 points, so there will be better sports betting opportunities for you.

The Tide’s SEC opener comes against one of the bottom-feeders of the conference. This game might be even less competitive than the Week 1 or Week 3 contests.

Sam Pittman brought defense back to Arkansas, and the Razorbacks went toe-to-toe with Alabama down in Tuscaloosa last year. I expect a similar neck-and-neck game this time around, turning into a defensive grinder that comes down to the last possession or two.

The Aggies beat Alabama in Texas last year, but playing in Tuscaloosa means that the Aggies won’t have that raucous 12th Man (the loud crowd) on their side. They will also have an Alabama team bent on revenge for that loss.

Will Josh Heupel turn out to be the right coach for Tennessee? Signs are mixed so far, but one thing we do know is that the Volunteers aren’t ready to make this a competitive game.

Mike Leach is still in Starkville, which means that the Bulldogs can pull some tricks out of their bag, but over the course of the game, Alabama is better on both sides of the ball, so this should be a two-touchdown win.

This is Brian Kelly’s first year coaching LSU, and it will be interesting to see whether his northern mannerisms have already worn down the Tiger faithful by November. Winning cures just about everything, but the Tigers have been trending downward ever since winning that national championship.

The Rebels should be able to score on Alabama, even with Matt Corral gone to the NFL. However, the Ole Miss defense will not have a lot of answers for Bryce Young, either. Think about taking the over here.

This is Alabama’s annual FCS scrimmage ahead of the Iron Bowl.

Alabama tried to give the Iron Bowl away last year, but Auburn wouldn’t take it. This time around, Alabama won’t make nearly as many mistakes.