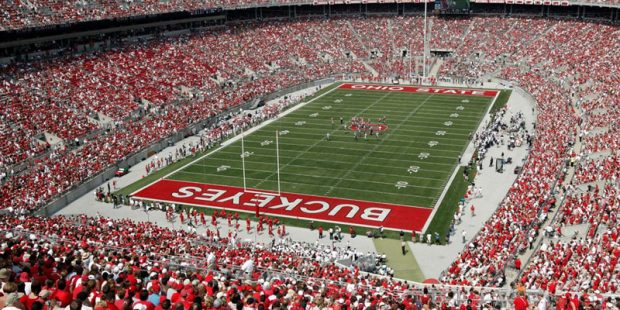 Yes, Ohio State capped off an 11-2 season with a win in the Rose Bowl. For most teams, that would represent an outstanding season. However, for the Buckeyes, the standard is higher, as Ohio State failed to win a Big Ten title and was not considered for the College Football Playoff. Last year’s Buckeyes were a young squad, and the defense had some problems, as did both lines. Can Ohio State bounce back in 2022? A lot of sports betting experts think so, and it will largely depend on improvement in those areas of weakness – as well as the fortunes of the likes of Michigan and Penn State. Take a look at our College Football predictions for each game on the Buckeyes’ schedule.

The Fighting Irish come in with a new head coach in Marcus Freeman, and while the Irish only lost one game last season (to Cincinnati), that was enough to rule them out of the College Football Playoff. The return of quarterback C.J. Stroud should keep the Ohio State offense consistent, and the arrival of a new defensive coordinator should shore up that side of the ball. 1-0.

The Red Wolves will gladly take their big check in exchange for a big loss. Arkansas State does have a lot of talent on offense, but their defense has been porous the last few seasons. 2-0.

An in-state MAC opponent comes to town, and the Buckeyes will continue to iron out the wrinkles on both sides of the ball. 3-0.

Wisconsin has a reputation for grinding out games on both sides of the ball, using a hard-nosed defense and big lines to control the rhythm. They haven’t been able to keep up with the high-flying offenses atop the conference in recent years, and I see Ohio State pulling away late. 4-0.

Rutgers can be a scrappy team at home, but it’s hard to see them keeping up with Ohio State at the Horseshoe. 5-0.

Going to Michigan State can be tricky, although it was trickier when Mark Dantonio was the Spartans’ head coach. They play physical defense and can be opportunistic on offense, but I expect Ohio State to be focused all season long. 6-0.

One of the tougher teams in the Big Ten West is the Iowa Hawkeyes. The defense forces a lot of takeaways, but this is another grinding team that does not have a quick pace on offense in their arsenal. 7-0.

This is a team that has gone 11-11 over the last two season, and they finished 2-6 down the stretch last year. James Franklin will be on the hot seat in Happy Valley, but at this point, it’s hard to see the Nittany Lions pulling off this upset. 8-0.

Northwestern is yet another Big Ten West team that has become interesting in recent years, but they rely on the same grinding philosophy that Iowa and Wisconsin use, and they don’t have that fifth gear on offense. 9-0.

Indiana has athleticism and talent, but they are a few levels below Ohio State. 10-0.

Could this be a trap game? I think this might be more likely than any of the other Big Ten road stops. However, even a sleepy first half can turn into a second-half rout with an offense like Ohio State’s. 11-0.