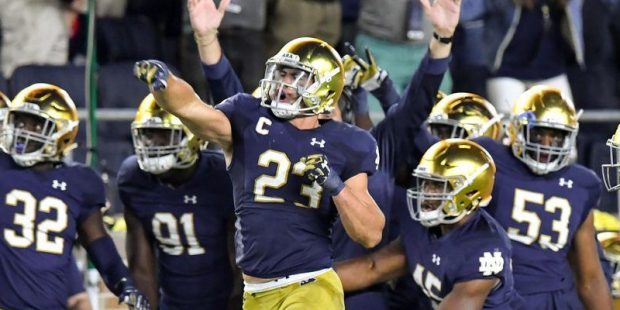 The Notre Dame Fighting Irish went 11-1 in 2021, with their only setback coming in Week 5 against Cincinnati. They started the season a bit slow, though, beating Florida State and Toledo by just three points each. They would start to wake up, beating Purdue by 14 and Wisconsin by 28, and after the loss to Cincinnati, they won seven in a row by an average of almost 24 points per contest. Marcus Freeman took over the head coaching duties (after the departure of Brian Kelly for LSU) with a bit of a letdown, as the Irish fell to Oklahoma State, 37-35, in the Cotton Bowl. His regular-season debut will not be any easier, as the Irish face the Buckeyes at Ohio Stadium. Let’s take a look at the Notre Dame schedule, along with College Football betting picks for each game.

Notre Dame has won five season openers in a row, but they have only won twice in six meetings with Ohio State – and the Buckeyes have won the last four. Ohio State’s offense led the nation with 45.7 points and 561.5 total yards per game last year. C.J. Stroud threw for 44 touchdowns and 369.6 yards per game, and he has Jaxon Smith-Njigba returning at receiver. 0-1.

Marshall and Notre Dame meet for the first time in Week 2. The Thundering Herd went 7-6 last year, and Rasheen Ali led Conference USA with 107.8 yards per game on the ground. However, Marshall coughed the ball up 25 times last year, the most in their conference and fourth-most in the nation. 1-1.

These teams have not met in more than 50 years, but the Golden Gears have never scored more than eight points against Notre Dame and have never permitted fewer than 21. Cal is solid with ball security, one of just nine teams in the nation to have 10 or fewer turnovers, and they led the Pac-12 with just two fumbles lost. 2-1.

The Tar Heels have only beaten Notre Dame once, back in 1960, after that 2007 win was vacated. North Carolina has to move on from quarterback Sam Howell, and the O-line also had problems, permitting 3.77 sacks per game (fourth-most in the nation) and 7.23 tackles for loss per game (11th). 3-1.

This year’s Shamrock Series game takes place in Sin City, but given that the Irish have won all 10 of the previous Shamrock Series games, there is some optimism. BYU last beat Notre Dame in 2004, and this year’s BYU team has had to replace tailback Tyler Allgeier’s production, as he was tied for the FBS lead in rushing touchdowns with 23, running for 1,606 yards. 4-1.

Stanford will come in playing its third road game in four weeks. After seven combined wins in their last two full seasons, the Cardinal look to bounce back to their pre-2019 form, when they won 10 wins in six of the previous six seasons. Notre Dame has won three in a row in the series. 5-1.

This is another first, as UNLV and the Irish have never met. The Rebels have only won 24 games over the last seven full seasons, and their O-line is a reason, as they permitted 3.3 sacks and over seven tackles for loss per game, leading to just 20.8 points per game. 6-1.

Syracu started 2021 with a 3-1 slate but then went 2-6 down the stretch, permitting at least 30 points in each of those games and snagging just six takeaways for the whole year. Tailback Sean Tucker did lead the ACC with 1,496 rushing yards, sixth best in the nation, becoming the first Syracuse player to break the 1,400-yard barrier. 7-1.

Clemson and Notre Dame have gone 2-2 in their regular-season matchups, each with a win at home and on the road. Clemson quarterback D.J. Uiagalelei had a forgettable 2021, throwing only nine touchdown passes, and leading his offense to more than 30 points just three times. Once again, Clemson will come in leaning on that defense, which permitted just 14.8 points per game, best in the ACC and second in the nation. 7-2.

Navy and Notre Dame have played every year since 1928, except for the COVID-shortened 202 season. Notre Dame have won four in a row in the series, and as long as they can deal with that triple-option offense, the Irish should roll again. 8-2.

Lincoln Riley makes his USC coaching debut this season, joined by quarterback Caleb Williams from Oklahoma. Williams threw for 18 touchdowns and threw for 1,670 yards, both school records for a true freshman (in seven starts). However, the Sooners did not meet anyone in their 2021 schedule with the quality of Notre Dame. 10-2.