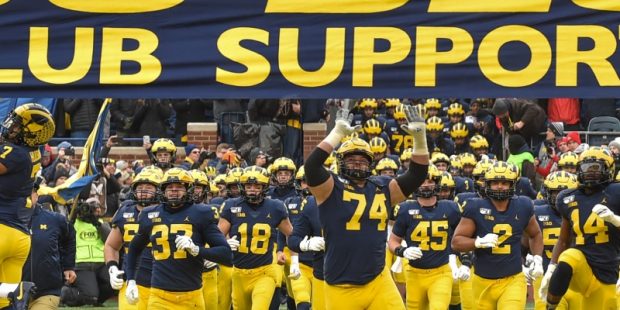 If Michigan is going to return to the College Football Playoff, they will have to run the table and win the Big Ten. That probably would have been true no matter who they scheduled for non-conference play, but they are not one of those teams that plays Power 5 opposition to build strength of schedule – and to add to their recruiting profile. They have three non-conference opponents: Colorado State, Hawaii and Connecticut. Those teams combined to post a 10-27 record last year. The Wolverines have lots of playmakers to replace on both sides of the ball, so navigating this year’s schedule will take a lot for Jim Harbaugh. Check out our College Football betting predictions for each game on the Michigan slate.

Colorado State has four wins in the last two seasons. New head coach Jay Norvell arrives from Nevada with 10 transfers, and he runs the Air Raid offense. Redshirt quarterback Clay Millen will test the Wolverine’s defense, as he has three talented wideouts. Is this an upset watch? Definitely, but I think the Wolverines win, even if they don’t cover. 1-0.

Hawaii also has a new coach, as school legend Timmy Chang took over for Todd Graham. No roster in the nation has less production than what Chang will work with, though, so this will be a tough sled. 2-0.

Three weeks, three games against teams with new head coaches. The Huskies bring back Jim Mora Jr for his second college gig. Connecticut has three starters returning on the O-line and three solid wide receivers, but this should be another easy win. 3-0.

Michigan is 9-1 against Maryland since the Terrapins came into the Big Ten. Maryland’s win in this series came back in 2014; in 2021, the Wolverines rolled, 59-18. Maryland does have some scary wide receivers, and the Michigan secondary is young, so this year’s game should be closer. 4-0.

The Wolverines finally leave Ann Arbor when the calendar turns to October, and the trip to Iowa has been a tough one for Michigan. The last time the Wolverines won in Iowa City was 2005; they went there last in 2016, and that loss kept them out of the CFP. The Hawkeyes return nine starters on offense, but that unit ranked 13th in the Big Ten in yardage. 5-0.

Indiana beat Michigan the last time the teams met in Bloomington, but the Wolverines bounced back last year with a 29-7 win. Head coach Tom Allen has a new offensive coordinator in Walt Bell after coming in dead last in the Big Ten. Quarterback Connor Bazelak transferred in from Missouri, and tailback Shaun Shivers came in from Auburn, so the offense should be better. Will it be good enough? 6-0.

Manny Diaz, the former Miami head coach, arrives as the new defensive coordinator, but the real problem for the Nittany Lions was that O-line, as the team rushed for just 3.21 yards per carry and permitted more sacks than any other team in the Big Ten. Can they cause Michigan problems? 7-0.

Sparty beat Michigan last year, 37-33, over in East Lansing. Seven Power Five transfers come in, and they should impact the team on both sides of the ball. Jarek Broussard (Colorado) and Jalen Berger (Wisconsin) both transferred in to take over for Kenneth Walker III at tailback. I think the Spartans are ahead of Michigan in transfer talent, so I’m going for the Spartan win. 7-1.

Michigan has a 7-0 record against Rutgers since 2015. Last year, the Scarlet Knights ranked 114th in the nation in passing yards, so the Wolverines should be able to bounce back from that loss to Michigan State. 8-1.

Scott Frost is now 15-29 at Nebraska after a 3-9 2021. He has a new offensive coordinator, in Mark Whipple, and Casey Thompson transferred in from Texas to take the quarterback job, but it doesn’t feel like enough. 9-1.

Michigan has won five in a row against Illinois, all via the rout, and they have won 71 of the 96 meetings between the two programs. The Illini will run the ball a lot with new offensive coordinator Barry Lunney and transfer quarterback Tommy DeVito from Syracuse. That will slow the game down, but Michigan should still win. 10-1.

The Wolverines should be ready for all sorts of revenge from Ohio State after beating the Buckeyes to win the Big Ten last year. 10-2.