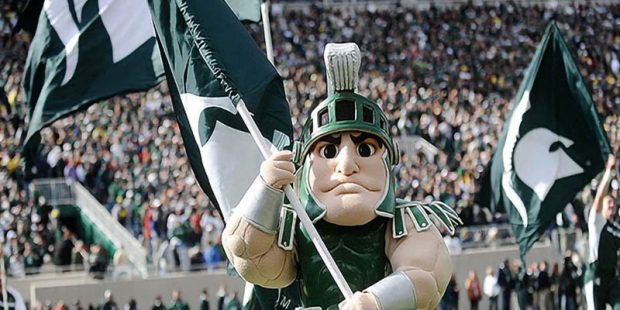 In 2021, the Michigan State Spartans improved from a 2-5 shortened 2020 campaign to an 11-2 record that included a win in the Peach Bowl. Mel Tucker enters this new season as the head coach with plenty of optimism in East Lansing. Let’s take a look at Sparty’s schedule, along with College Football online picks for each game.

The Spartans have won 12 of their last 13 season openers, with the only loss coming in that COVID-19 season of 2020, and they have never lost to Western Michigan. The Broncos will compete in the MAC this season, but they won’t slow down the Spartans. 1-0.

This is another MAC team, but Akron is not nearly as good as Western Michigan. The two programs have never met, but the Zips will finish near or in the basement of the conference, as new coach Joe Moorhead has a lot of work to do. 2-0.

Heading west makes this a big test, but the Huskies will be working in their new coaching staff and are not expected to contend in the Pac-12. Washington does have a good amount of talent, but figuring out their new schemes means opportunity for the Spartans. 3-0.

The Golden Gophers are tough, but they’re a lot tougher on the road, so I see the Spartans winning their Big Ten opener. 4-0.

Taulia Tagovailoa returns at quarterback for the Terrapins, and this is a team that can score some points. So can the Spartans, though, so I see them winning this track meet. 5-0.

This would be a huge win for Michigan State, but even keeping it close after last year’s blowout would be an improvement. 5-1.

Wisconsin’s offense should be more versatile than last year, but because of talent losses on both sides of the ball, they are not the Big Ten West favorites this time around. 6-1.

Michigan brings back a lot of offensive talent, and going on the road makes this a lot tougher for the Spartans. The Wolverines will be looking for revenge after losing two in a row in this rivalry. 6-2.

The Illini will not be quite as surprising this year and could finish dead last in the Big Ten West. 7-2.

The Scarlet Knights should finish last in the Big Ten East, giving the Spartans two basement-dwellers in as many weeks. 8-2.

Last year was tough for the Hoosiers, so it will be difficult to gauge them for a few games, as they have a lot of talent but had a hard time with their scheme. On Senior Day, though, the Spartans should win. 9-2.

Out of the Big Ten Championship but playing for a New Year’s Six bowl, the Spartans go on the road and extend James Franklin’s frustrations. 10-2.